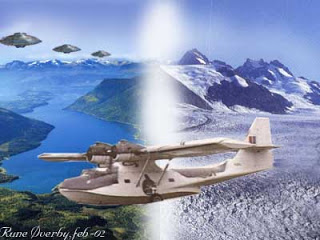 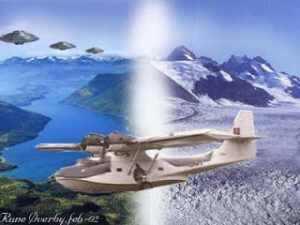 The secret diary by Admiral Richard E. Byrd of his fateful arctic flight still fascinates even today! The real question remains what did Byrd see? The picture, at left, conveys the artist's impression that Byrd flew through a portal to another world. What can a reader glean from the actual flight journal Byrd recorded on February 19, 1947? After three hours of flight northward, Byrd enters first anomaly: "0910 Hours- Both Magnetic and Gyro compasses beginning to gyrate and wobble, we are unable to hold our heading by instrumentation. The controls are seemingly slow to respond and have sluggish quality, but there is no indication of Icing!" Onboard compasses are no longer working and controls seem odd to pilot Byrd.

Just five minutes later, the following entry reads: "0915 Hours- In the distance is what appears to be mountains." The Admiral's honest astonishment comes through in his subsequent entries: "0955 Hours- Altitude change to 2950 feet, encountering strong turbulence again. 1000 Hours- We are crossing over the small mountain range and still proceeding northward as best as can be ascertained. Beyond the mountain range is what appears to be a valley with a small river or stream running through the center portion. There should be no green valley below! Something is definitely wrong and abnormal here!"

Less than an hour since the first observed anomaly, Byrd takes two left turns to circle for a closer look below: "1005 Hours-The Light here seems different. I cannot see the Sun anymore...we spot what seems to be a large animal of some kind below us. It appears to be an elephant! NO!!! It looks more like a mammoth! This is incredible! Yet, there it is! Decrease altitude to 1000 feet and take binoculars to better examine the animal. It is confirmed - it is definitely a mammoth-like animal!" There is no sun in the sky that Byrd can see and the light is different in his estimation. Observations seem consistent with a description of an inner earth?

The novelty of Byrd's situation keeps escalating. After 80 minutes of flight without compasses, instrumentation returns to normal except communications. Byrd enters: "1030 Hours-...The external temperature indicator reads 74 degrees Fahrenheit! Continuing on our heading now. Navigation instruments seem normal now. I am puzzled over their actions. Attempt to contact base camp. Radio is not functioning!"

At this point, 1130 Hours, Byrd reports loss of the use of controls and encounters new civilization. "Ahead we spot what seems to be a city!!!! This is impossible! Aircraft seems light and oddly buoyant. The controls refuse to respond!! My GOD!!! Off our port and starboard wings are a strange type of aircraft. They are closing rapidly alongside! They are disc-shaped and have a radiant quality to them. They are close enough now to see the markings on them. It is a type of Swastika!!! This is fantastic. Where are we! What has happened...We are caught in an invisible vice grip of some type!"

"1135 Hours- Our radio crackles and a voice comes through in English with what perhaps is a slight Nordic or Germanic accent! The message is: 'Welcome, Admiral, to our domain."

"1145 Hours- I am making a hasty last entry in the flight log. Several men are approaching on foot toward our aircraft. They are tall with blond hair."

Byrd reports later on his visit to a city made of crystal and Buck Rogers futuristic quality of his encounter. The report includes a platform conveyance with no wheels, an elevator door that opens sliding up and down and rose-colored lights emanating from passageway walls.

Byrd meets "the Master" who informs him, "We have let you enter here because you are of noble character and well-known on the Surface World, Admiral.' Surface World, I half-gasp under my breath! 'Yes," the Master replies with a smile, 'you are in the domain of the Arianni, the Inner World of the Earth." The Masters conveys message of their grave concern over use of atomic weapons and how attempts to establish contact are rebuffed and their "flugelrads" fired upon! Byrd communicates clearly a Germanic civilization, which must have some surface contact to utilize a term such as flugelrad! Does it render Byrd's account suspicious?

In March 1947, Byrd makes his report to the Pentagon and is sworn to secrecy! The last note dated 12/30/56 is a clear lament by Byrd. "Now, I seem to sense the long night coming on and this secret will not die with me, but as all truth shall, it will triumph and so it shall. This can be the only hope for mankind. I have seen the truth and it has quickened my spirit and has set me free! I have done my duty toward the monstrous military industrial complex."

Is there an Arianni civilization inside a hollow Earth? Was Admiral Byrd attempting to utilize his visibility as prominent public figure in the service of humanity? There seems, arguably, more in support of the latter than the former? Admiral Byrd's journal is an entertaining and interesting conundrum to contemplate!