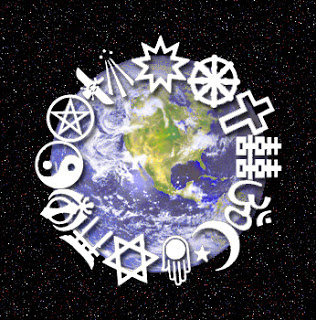 Agrarian Magic: 20 Theories on the Origin of Religion

from MysticPolitics.com: Mystic Politics has compiled the top 20 theories on the origin of religion, from animism to agrarian magic: Religion is a species-specific human universal phenomenon, complex, full of paradoxes, and found in all cultures. Social scientists and anthropologists since the late 17th century have attempted to rationally answer questions about religion, and while we can’t evaluate the veracity of religion’s claims, we can attempt to understand its functions.

The methods of comparative religion, comparative mythology, with interdisciplinary analysis throughout the fields of ethnography, neuroscience, psychology, sociology, anthropology, history, and linguistics have made a lot of progress in the last 100 years, with a boom of database-driven analysis in the last decade. There are a number of theories attempting to explain the mystery of religion’s origin, purpose, functions and spread, from ancestor and soul worship, animism, totemism, spirit propitiation, magic theory, cultural memes, agrarian overseer gods, fear and worship of spirits, evolved adaption, or by-product of evolved adaption, and as a control mechanism.

There are multiple definitions and criterion of religion, most dealing with the supernatural, the unknown, the ineffable, the numinous, that terrific agency of the gods, or the comfort of ancestors and hero archetypes.

It seems clear that most anthropologists and researchers into religion’s origins agree that its genesis lies in a hyper-agency detection device of our brain, even though not explicitly named by proto-anthropologists, who saw it as ‘pre-animism’ or a step right before or after nature myth and nature worship.

Hyper-Agency, Nature Myth, Anthropism, Animism, Ancestor Worship, Totemism, Ghost Propitiation, and Magic formed the nucleus or germ of religious thinking and belief.
This germ or seed of religiosity bloomed into towering totems of religious orthodoxy and law, which in times of duress or necessity transformed into paternalistic, moralistic, and seemingly hostile High Gods.

These High Gods acted as a constabulary force, to the benefit of emerging authoritarians, or Big Men, who leveraged the fuzzy thinking of the citizenry towards their own power and propagation.
As Neurotheology and the science of belief continues to develop, so too will our understanding of the often poetic and romantic mythology of man- what underlying purpose it serves, and what cold truths it assuages. For the full article, continue here.