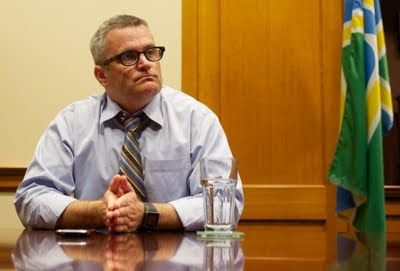 from koin local 6: In an open letter to Portlanders, Mayor Sam Adams announced Friday he will not seek re-election. After pondering on the topic during a week-long “staycation,” the mayor said the choice was clear, help move Portland forward right now or focus his efforts full-time into a new campaign.

An excerpt from the 600-word letter:

"My best service to Portland will be to complete the platform of change and improvement you elected me to deliver: Creating jobs, increasing the high school graduation rate, and making Portland the most sustainable city, with the most equal of opportunities. This work is well underway, and I'm committed to making every day of the next 17 months count."

"This is a good move for Sam and a fresh start for Portland," said Hales in a release.

When elected in 2008, Adams was the only openly gay mayor of a large U.S. city. Shortly after taking office he admitted to a sexual relationship with Beau Breedlove, an intern at City Hall.

Adams' reluctance to admit the relationship caused a stir post-election, even prompting several failed efforts to force a new election.

Prior to being elected mayor, Adams was elected to the city council and also was a chief of staff for former Mayor Vera Katz.

While Adams may end up getting credit for the Columbia River Crossing or light rail expansions after his mayoral term is up, Dr. Jim Moore--political science professor at Willamette University and KOIN Local 6 analyst--said the mayor's legacy will likely be linked to the economy.

"He guided the city through a very tough economic time," said Moore, "And that may be the only legacy possible for someone in office during this four-year period."

And what does Adams say about his legacy?

The mayor said his job is the best in the nation but he's keeping his options open, even poking fun at his cameo appearance on the popular TV comedy 'Portlandia.'

"I understand Portlandia's filming their second season in town right now, and you know, my agent has been talking to their agent to find out whether we can come to agreement over my salary," said Adams.