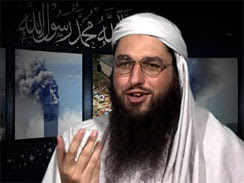 ‘al-qaeda’ agent held in pakistan is not ‘adam gadahn’

from latimes: The American Al Qaeda operative arrested in Karachi over the weekend was not the Southern California native wanted by the U.S. on treason charges for his involvement in the terror network, Pakistani intelligence officials said Monday.

Pakistani security officials initially asserted that the American Islamic extremist they had captured in the country's largest city late Saturday night was Adam Gadahn of Riverside, a spokesman and top propagandist for the Al Qaeda terror network.

However, by early Monday morning, doubts arose about those initial reports. U.S. officials said they were skeptical of those claims and that there was no indication that Gadahn was the suspect arrested in Karachi.

Gadahn, 31, remains at large. He is on the FBI's list of most-wanted terrorists and is the first American since the World War II era to be charged with treason. The U.S. government has offered a $1-million reward for information leading to his arrest.

He was indicted in 2006 by a federal grand jury in Orange County for allegedly providing material support to Al Qaeda by appearing in videos on five different occasions between Oct. 27, 2004, and Sept. 11, 2006, with the intent "to betray the United States."

His latest video was posted on extremist websites Sunday. In it, he urged Muslims serving in the American military to emulate U.S. Maj. Nidal Malik Hasan, the Army psychiatrist accused of killing 13 people at the Ft. Hood military base just outside Killeen, Texas, on Nov. 5.

In the video, Gadahn called Hasan "the ideal role model for every repentant Muslim in the armies of the unbelievers and apostate regimes."