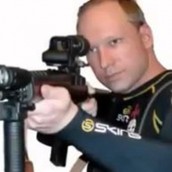 Oslo and Utoya island killer Anders Behring Breivik possesses traits of a manufactured patsy, right down to a third name in the manner of Lee Harvey Oswald. Paul Joseph Watson lists a number of anomalies, such as the killer's changing Facebook page, in recent article, "Anders Behring Breivik: Manufacturing a Patsy?". There is, also, the simple observation that it's improbable one shooter managed to kill upwards of 80 people on his own. Further, Breivik was seen hanging around Oslo for extended period around time of bombing, and another curious fact, Norwegian Prime Minister had been scheduled to be there. Oslo Police conducted bombing exercise just days prior to real bombing. There's more but when storyline and visuals rival a Hollywood movie, it begins to smell like a false flag psyop! Wayne Madsen reports a Mossad connection and Norway supports Palestinians' cause. Alex Jones interviewed by Russia Today says,"Breivik Mason's Patsy," and observes a flip in the global agenda, where right wing extremists become tool of choice, now. Jones gets it right to reveal Masonic links! It's Masons not Muslims, stupid!