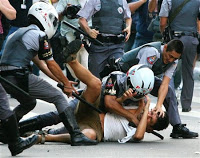 from german press agency/raw story: Some 10,000 demonstrators Thursday took over the financial centre of Sao Paulo to protest the visit of US President George W Bush.

Bush was expected to arrive at 2300 GMT in Sao Paulo, and is scheduled to meet Friday with Brazilian President Luiz Inacio Lula da Silva.

Carrying signs with slogans like "Out with Bush!" and "No to War!" demonstrators were led by feminist groups who combined their protest with demands to mark International Women's Day.

"The world in which Bush promotes war is the same world in which women live. They suffer the consequences of war, of imperialistic politics," said feminist militant Sonia Coelho, who also criticized Bush's position against abortion.

Protestors gave out leaflets with an image of Bush's face on the body of Nazi leader Adolf Hitler and called the US president "humanity's number-one enemy."

Students, trade unionists, landless peasants and left-wing activists - including members of Lula's own Workers' Party (PT) - were also present at the march.

"We are taking advantage of International Women's Day to protest the arrival of Bush. We want to reveal the other side of the story and show that he wants to deconstruct the Latin American economy," said the lawyer Rogerio Batalha Rocha.

Bush's visit is accompanied by the largest security operation ever launched in Brazil to host a foreign dignitary. Around 4,000 troops from the Army, Air Force and the federal, militarized and civil police corps are involved in securing the Bush visit.

The US president is set to remain less than 24 hours in the Brazilian metropolis and is to leave Friday for Uruguay, on a Latin American tour that also includes planned stops in Colombia, Guatemala and Mexico.