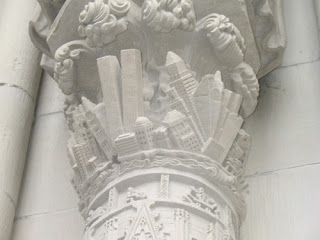 You need look no further than St John The Divine Cathedral, if you’re wondering what a One World Religion might look like? Vigilant Citizen (VC) does masterful job pointing out sights with heavy occult overtones in, “Sinister Sites – St John the Divine Cathedral,” in New York City. VC reminds reader John the Apostle is credited with writing the Book of Revelation. The apocalyptic messages are blatant on this Gothic Cathedral – Masons the principal builders with laying of the cornerstone on Dec. 27, 1892.  VC observes, “the destruction of New York city (including the Twin Towers) sculpted right on the building… Strange occult symbols on the floor… Weird rituals being performed in the sanctuary… Home of the Temple of Understanding which admittedly seeks to instate a new world religion… This cathedral is definitively “different”…the cathedral is in fact a temple of Neo-Pagan-Bordeline-Satanic-the-Environment-is-more-important-than-human-life beliefs”. What kind of house of worship is this? VC makes it very clear, messages telegraphed are in the open for anyone to see! You may also want to view video of large Halloween celebration – “The Procession of Ghouls” held at the Cathedral. Wow!