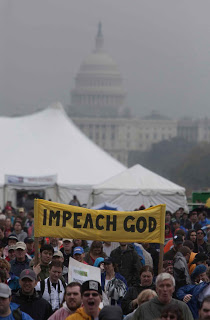 Atheists rally on National Mall in show of political force

from religionnews.com: Atheists and nonbelievers gathered on the National Mall Saturday (March 24) in a bid to show politicians, voters and even themselves that they have grown into a force to be recognized and reckoned with. "We are here to deliver a message to America," David Silverman, president of American Atheists, one of the rally's sponsors, told the crowd. "We are here and we will never be silent again." Indeed, thousands came out for what organizers dubbed The Reason Rally and billed as the largest-ever gathering of nonbelievers in one place. They stood in a steady and sometimes heavy rain as speakers, singers, writers, comedians and activists charged them with channeling their common rejection of God into a force for political change.