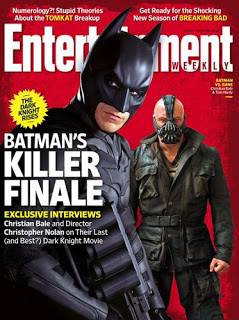 Clyde Lewis, host of Ground Zero Live, writes in "Killer Finale" how strange synchronicity arrived on his desk in the form of a Entertainment Weekly (ETW) magazine cover (picture).   Lewis points out ETW issue came out prior to the Batman movie shooting, last week, in Colorado.  A series of copy cat episodes since the shooting, leave Lewis with impression an army of mind-controlled assassins lie in wait among us.  The zombie killers may just be a trigger phrase away from reeking pure mayhem?  It's been rumored for years so-called "sleepers" live among us, by all appearances, lead ordinary lives until called upon to fulfill their tasks.  Lewis notes this isn't first deadly incident, in 2009, Spc. Christopher Lannum acted out Joker role from Dark Knight Returns series.  Lannum was killed at hands of police, when he wouldn't put his gun down. Lewis makes argument for a Batman Zombie meme, where mind control victims are programmed with roles and scripting from Dark Knight Returns series.  The article also links James Holmes, the alleged shooter with his father's research in a most interesting turn in case.  Lewis cites recent article by Wayne Madsen, "Aurora massacre: Several links between James Holmes and US Gov't research," who suspects Aurora shooting may be case of super soldier experiment gone bad, "...links between the younger and elder {Dr Robert] Holmes and U.S. government research on creating super-soldiers, human brain-machine interfaces, and human-like robots beg the question: "Was James Holmes engaged in a real-life Jason Bourne TREADSTONE project that broke down and resulted in deadly consequences in Aurora, Colorado?" Madsen concludes his article with tongue-in-cheek warning that you may want to skip next Jason Bourne movie.  Lewis makes strong case for mind control programming that employs Dark Knight Returns scripting much as the once ubiquitous "Alice in Wonderland" mind control programming has been used in the past.  I know, readers don't see a need for concern about mind control?  Aurora shooting incident is only latest where readers may begin to reassess their needs?