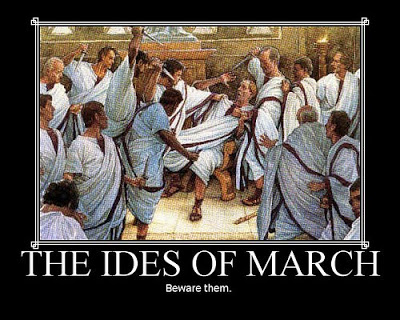 Beware the Ides of March: From Then to Now 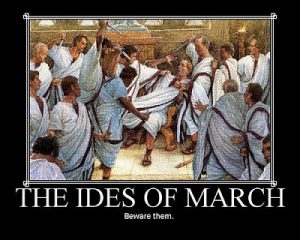 from abc: Roman dictator Julius Ceasar may have been warned that deadly harm would befall him no later than March 15. But the soothsayer who supposedly delivered the prophetic message couldn't possibly have foretold what he would inspire, including a "Simpsons" episode called "Homer the Great, an episode of "Xena: Warrior Princess," and a U.S. rock band from Berwyn, Ill., named the Ides of March. Even Oscar-winner George Clooney is in on the act, reportedly finishing up filming of his "Ides of March," a movie about a presidential campaign in which he acts and directs. Indeed, the supposed encounter that William Shakespeare so tragically depicted in his "Julius Caesar" ("Beware the ides of March") has become the stuff of popular culture. Samantha Thompson, a librarian who manages the New York Public Library's 24-7 reference service, says about a dozen people regularly ask about the Ides of March at any given branch on March 15. "It's an example of a famous, ominous prophesy when the world changed."