bill would give president emergency control of internet 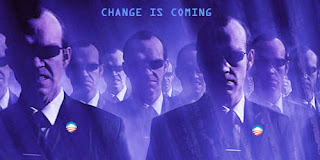 from antifascist calling: You have to hand it to congressional Democrats. Mendacious grifters whose national security agenda is virtually indistinguishable from Bushist Republicans, when it comes to rearranging proverbial deck chairs on the Titanic, the party of "change" is second to none in the "all terrorism all the time" department. While promising to restore the "rule of law," "protect civil liberties" while "keeping America safe," in practice, congressional Democrats like well-coiffed Republican clones across the aisle, are crafting legislation that would do Dick Cheney proud!

As the Cybersecurity Act of 2009 (S.773) wends its way through Congress, civil liberties' advocates are decrying provisions that would hand the President unlimited power to disconnect private-sector computers from the internet.

CNET reported August 28, that the latest iteration of the bill "would allow the president to 'declare a cybersecurity emergency' relating to 'non-governmental' computer networks and do what's necessary to respond to the threat."