pentagon clashes with media over control of information

from danger room: Forget the drone stuff. Here is your eye-popping statistic of the day: "This year, the Pentagon will employ 27,000 people just for recruitment, advertising and public relations - almost as many as the total 30,000-person work force in the State Department." That's from an Associated Press investigation, "which found that over the past five years, the money the military spends on winning hearts and minds at home and abroad has grown by 63 percent, to at least $4.7 billion this year." Staff costs take up most of the money, more than $2 billion. Another $1.6 billion goes into recruiting. About a half-billion goes towards "psychological operations, which targets foreign audiences." And, finally, "$547 million goes into public affairs, which reaches American audiences." That last one may be the most amazing figure of 'em all. Because getting a straightforward answer out of most military public affairs shops is still a root-canal-painful procedure. You'd think it'd be easier, with all those resources brought to bear.

from danger room: Blackwater Worldwide's core business - diplomat protection - is in trouble. The mercenary firm is getting kicked out of Iraq, and their actions in Afghanistan are now under investigation by the State Department's Inspector General. Which is why Blackwater is diversifying, fast. The company's latest offering: Firearms and self-defense classes for pro athletes. "The first weekend class at the company's compound in North Carolina is set for April, about six months after New York Giants receiver Plaxico Burress (pictured) shot himself in the thigh inside a nightclub," the AP notes. "No athletes have signed up yet for the weekend course, which the company only began advertising this week." In some ways, it's a return to Blackwater's roots. The firm got its start "providing such training, and last year, some 25,000 people - civilians, law enforcement and military - attended its classes," the AP adds. But Blackwater isn't simply going old school. Firm CEO Erik Prince has put together teams of spies-for-hire. The company is pushing ahead with plans to protect commercial ships, traveling through pirate-packed seas. And in case that doesn't work out, Blackwater is making custom rifles, marketing spy blimps, assembling a fleet of light attack aicraft, and billing itself as experts in everything from cargo handling to dog training to construction management. But many athletes - especially NFL players - feel these days like they have to take drastic measures, to protect themselves. Which makes me think a few of them might like the idea of being trained by the world's most notorious mercenary outfit. 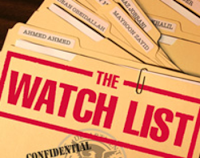 from threat level: The House overwhelmingly adopted legislation this week mandating the creation of a new kind of terrorist watchlist: a database of people who aren't terrorists, but are routinely flagged at airports anyway. The U.S. government maintains a list of about a million names of suspected terrorists that is crosschecked with passenger names ahead of airline boarding. The list has been dogged for years by sloppy name matches that have ensnared innocent travelers, children, prominent politicians and government officials, the U.S. Conference of Catholic Bishops' secretary of education and all men named David Nelson. Under the new plan, approved late Tuesday 413-3, innocent victims of the terrorist watchlist must prove to the Department of Homeland Security, through an undetermined appeals process, that they are not terrorists. They would then get their names put on what the legislation calls the "Comprehensive Cleared List." The legislation is another attempt to assist wrongly flagged passengers and would supersede the troubled DHS Traveler Redress Inquiry Program, which has been criticized for being slow or unresponsive to flier complaints. The FAST Redress Act, if approved by the Senate, requires the government to report within 240 days on its progress in implementing the new list.