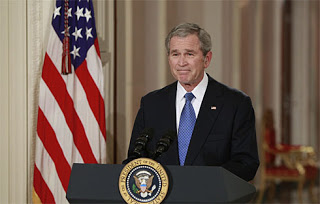 from afp: US President George W. Bush on Thursday hailed Barack Obama's January 20th inauguration as a moment for national "hope and pride" but warned Americans against any let-up in the war on terrorism. In his farewell speech after eight divisive years in office, the vastly unpopular Bush urged agreement - on his success in thwarting attacks like those of September 11, 2001, on the need for global US leadership, and on the historic nature of swearing in the first black US president.