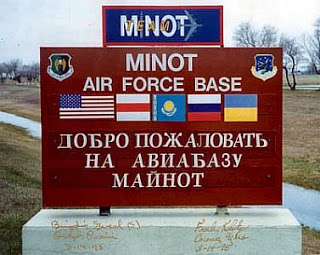 from ap: The body of a missile combat crew commander from the Minot Air Force Base was found by police, and the cause of his death is under investigation, the Air Force says. A statement issued by the base Sunday said the body of Capt. Jonathan Bayless, 28, was found Friday night [jan30]. Police did not give details but said it was in an area north of the city soccer complex, and they are awaiting autopsy results. Col. Christopher Ayres, the base’s 91st Missile Wing commander, said Bayless was a training chief with the 91st Operations Support Squadron. He had been at the Minot Air Force Base since March 2005. Bayless went on active duty in May 2003, the statement said. Base officials did not list his hometown but said he had been assigned earlier to Vandenberg Air Force Base for missile combat crew member training. “The 91st Missile Wing has lost not only a valuable member of our team, but a member of our family, and he will be missed.” Ayres said in the statement. The Air Force said casualty assistance officers and unit members are helping Bayless’ family and a memorial service is being planned.

from cryptogon: The 91st Missile Wing is a U.S. Air Force strategic nuclear missile unit. They deal with the Minuteman III ICBMs. I’ve added this to the Minot AFB Nuke Master Death List.