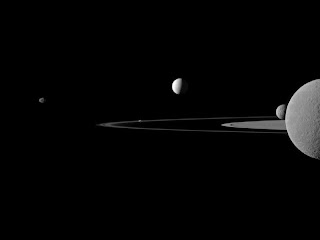 Cassini spacecraft continues to amaze with images returned to Earth! In the image (pictured), according to article at The Daily Galaxy, "...NASA's Cassini spacecraft captured five of Saturn's moons in one image: Janus, Pandora, Enceladus, Mimas and Rhea. Janus (179 kilometres, or 111 miles across) is on the far left. Pandora (81 kilometres, or 50 miles across) orbits between the A ring and the thin F ring near the middle of the image...Saturn’s second largest moon, Rhea (1,528 kilometres, or 949 miles across), is bisected by the right edge of the image. The smaller moon Mimas (396 kilometres, or 246 miles across) can be seen beyond Rhea also on the right side of the image." Enceladus remains a focus of interest in article, because of its volcanic activity. Did you know streaming vapor jets of icy particles from the area of Enceladus' south pole replenishes material in Saturn's outer most ring?