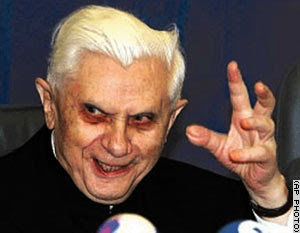 catholic church blames abuse on the devil in the sixties

from spirited atheist: The study, conducted by the John Jay College of Criminal Justice of the City University of New York at a cost of $1.8 million (mainly borne by the church and Catholic organizations) relied heavily on data provided by the church. The report suggests that Catholic priests who came of age in the 1940s and 1950s were unprepared for the sexual revolution of the 1960s, lost their ethical moorings and violated children because of the confusion and stress created by an altered social and sexual climate. I’ll buy just one part of that theory—the part about priests being unprepared not only for the greater sexual openness of the Sixties but also for any understanding of the importance of pleasurable, consensual sex in adult life.

Karen Terry, the report’s principal investigator and dean of research and strategic partnerships at John Jay College, said in an interview that although the number of abuse cases rose in the Sixties, she could not say with any certainty whether many cases from the 1920s through the 1950s went unreported. "Was there more abuse in the 50s than we reported in our graph?" She asked. "No doubt. However, there is still an increase in the 1960s. That’s been shown each year the data has come in."

“No doubt” is the understatement of this century and the last.

download the full report: causes & context of sexual abuse of minors by US catholic priests, 1950-2010