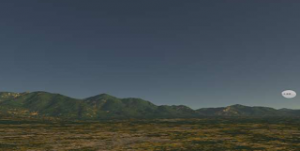 Charles Hall, Airman First Class, served as a weather observer at the Indian Springs, NV gunnery range from 1965 to 1967.  Writer Skylaire Alfvegren quotes in article on Hall  what he discovered, “I spent most of my time as the duty weather observer at the gunnery
ranges up at Indian Springs. And while I was up there, I discovered that there was a base that the U. S. government maintains for a group of aliens that I call the Tall White Aliens…Hall claims that from Indian Springs, if you look straight north up the Indian Springs Valley, and a bit to the east, you’ll find their main base in those mountains. [picture includes a scout ship built on Earth] (The location is known as Area 54.)….”  The former airman details experience with the “Tall Whites” in book series entitled Millennial Hospitality.

Hall observes in article, he came to realize times when the aliens scheduled their arrivals and departures:

“’Every month on the night of the full moon, at or near sundown, the deep space craft arrive, coming in over Dogbone Lake. They pull into port, into the main hangar, where they repair and they refuel and they refurbish. On the night of the new moon, they go out to Dogbone Lake and take off. They use the base in the same way the U. S. Navy or the U. S. Air Force would use a base, say, on an island in the Pacific.’”

In a second article, an analytical approach is applied to the information supplied by Hall.  A glimpse at the technology possessed by the aliens and their craft are described:

“The Tall Whites obviously possess highly-advanced technology. Hall confined his descriptions of their technology to brief discussions of their deep space craft, the scout craft used for travel near the earth’s surface and around the solar system, a weapon that they always carried, and special suits that afforded them limited levitation and also a defensive force field.”

“These beings are all well-armed, and they can and do kill, sometimes at the tiniest provocation. They react and move much more rapidly than humans can, so if they decide you have threatened them, you may be cut down and bleeding out without having even been warned…there was a pattern of confrontations with our personnel, in which panic led to injury and death of our soldiers.”

“On one occasion the beings even turned on Hall without warning, grievously wounding him in the neck, and leaving him to bleed his life away in the desert dust. In that desperate situation, alone and miles from any human help, Hall found a way to save his own life by using his body weight to press his wound against the soft earth, stemming the flow.”

The alien dwellers in the Indian Springs Valley are humanoid in appearance but like warmer temperatures, according to Hall, and reach about six feet in height at adulthood.  The aliens experience a second growth spurt in their fourth century of life to reach upwards of eight to nine feet tall. Hall describes most Tall Whites die from organ failure at approximately 800 years of age–pretty interesting stuff!  One Tall White told Hall she was born on Earth, at the time, James Madison was President.

Hall believes these humanoid “aliens” still reside in the Indian Springs area as they have for thousands of years. The former serviceman doesn’t know their world of origin but suspects Arcturus may be close? Tall Whites make for an interesting read even if Charles Hall turns out to be a disinfo agent.  You can hear Hall first hand in following interviews at Vibrational Radio:  part 1, part 2 and part 3.

One response to “Charles Hall and the Tall White Aliens”