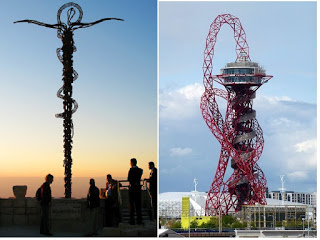 Zen Gardner clues us in to the symbolism of the Olympic Orbit Tower in recent post, "'Brazen Serpent' - Rothschild Zi-Olympic Scam Exposed." The present writer believes much as Gardner key to winning battle, is seeing through the symbolism. Gardner exposes Zionist perps, "the serpent symbol (carefully “woven” into human consciousness by early serpentine social engineers eons ago) is wrapped in the same DNA resembling lattice work as the “orbit”, even looping over the head/top of the statue like the brazen serpent. And it’s writhing around a human image apparently presaging the Christ image, but in effect showing the control and containment of man by serpentine forces...The meaning of this statue in Jordan [picture, left] is profound. That Moses was supposedly stopped here and given such significance in this Zionist narrative is amazing. And that this archetypical symbol of man wrapped in this DNAish serpent just 'nails' it. To me it makes total sense that the bloodlines would choose this as the theme, and get some super-duped engineer to disguise it enough and get it to support a 'viewing platform' [picture, right] as in encased humanity? Fulfilling the original?"

Gardner believes thrust of hidden symbolism: "...London Olympics are the next big step toward rationalization and acceptance of the nation state, the inter-nation state and therefore state control. Everywhere. While it's acutely occult, the blatant message is submit or else, same as the US right now."

The conclusion contains message on the power of truth: "So as usual the whole scam is bad to the bone. Nothing new. It's just good to catch them at their game. When we identify, consciousness spreads more than exponentially...and actually foils their plots! That's how important True, Loving information is!" The real meaning is if you are truly conscious of these identifiable attempts to control - to make mankind submit - the attempt falls flat as you see it for what it is: control.