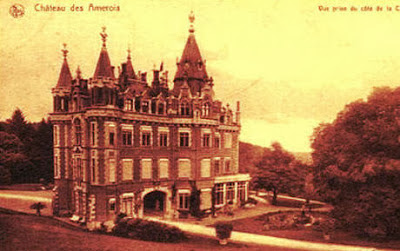 Chateau Des Ameriois leaked out into alternate media, in the nineties, but reveals a loci much closer to nexus of elite pedo- phile networks - so remains important to anyone concerned about our souls!  The remote castle in forests of Belgium on border near Luxemborg and France, has been alleged to be a place of Monarch programming, orgies and child sacrifice.  Marc Dutroux, notorious sex killer, has also been  connected to castle.   Perhaps, even more disturbing, Marc Dutroux, "was in the background," according to victim Regina Louf.  Dutroux likely a procurer of girls for likes of Michel Nihoul, as shown on crutches (sickening attempt to elicit sympathy?) in "Belgian X-Files," a documentary featuring Louf that makes story come to life!  Belgian X-Files provides viewers some idea what may have occurred at the castle.  Louf also attests to big money involved in pedophile underworld.  Researcher Fritz Springmeier turned up following on pg 205 of his book, "Bloodlines of the Illuminati" (pdf):

"...Fritz Springmeier cites a secret castle situated near the village of Muno in Belgium. This castle according to Springmeier, is a center of the occult and has a cathedral with a dome containing 1000 lights. The castle is referred to as the Mothers-of-Darkness castle and Monarch programming is supposedly performed on children there. This castle is also known as the 'Castle of Kings'. Its real name is "Chateau des Amerois" and it is located in Bouillon (Belgium), near the village of Muno. This castle and its domain, the Muno forest once belonged to Prince Philippe of Saxe-Cobourg-Gotha, Count of Flanders and father of King Albert I. He purchased the property in 1869 to the Marquis van der Noot d'Assche.The castle of Romantic style was built in 1877 for Philippe of Saxe-Cobourg Gotha by the architect Gustave Saintenoy. It has 365 windows. This castle was later bought by Alice Solvay, niece of the Belgian scientist and industrialist Ernest Solvay and today is apparently still owned by the Solvay's."

Is this the same thousand points of light made famous by George H.W. Bush?

A brief video, "Chateau Amerois II," provides some faces connected to castle below.