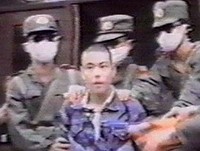 from abc news: For the first time, the Chinese government has admitted selling the organs of executed prisoners for profit, a gruesome business it had denied for years.

Speaking at a national conference of transplant surgeons in Guangzhou last week, Vice-Minister of Health Huang Jiefu admitted, “Apart from a small portion of traffic victims, most of the organs from cadavers are from executed prisoners,” according to the China Daily, a state-run English-language newspaper published in Beijing.

Harry Wu, a former political prisoner in China and human rights activist, says that Huang’s statement is an important admission.

“Ten years ago I talked about this, ABC and BBC reported, Congress held hearings about this, and China always denied it, saying ‘No, no, no, never,'” said Wu. “And this time, they said ‘Yes.'”

According to the published account, the health vice-minister complained that foreigners were getting the vast majority of the organs because they could better afford to pay than Chinese citizens. The cost of a prisoner’s kidney has been estimated by human rights groups at about $90,000.

Wu says that poor Chinese are selling their organs on the black market, even though it is now illegal in China to sell organs for profit.

A Ministry of Health official in Beijing declined to comment, saying that ABC News needed to submit a written application for an interview.

Sophie Richardson, an Asia expert for Human Rights Watch, says China still has a long way to go to improve its human rights standards. “This is the beginning of an effort to look like it’s responding to concerns about some pretty grotesque behavior.”

The Chinese government established a special committee to crack down on the organ black market earlier this year.