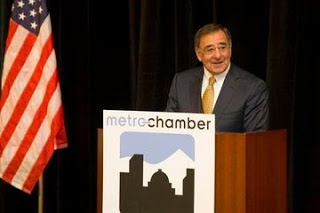 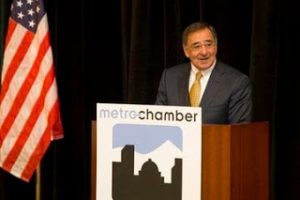 from sacramento press: Central Intelligence Agency director Leon Panetta told 300 Sacramento Metro Chamber Cap-to-Cap delegates that the next “Pearl Harbor” is likely to be an attack on the United States’ power, financial, military and other Internet systems.

Panetta addressed the Sacramento delegation that includes 43 elected officials and hundreds of business and civic leaders who are in Washington D.C. for the annual program that advocates for the region’s most pressing policy issues. He spoke on Monday, April 19, during the Cap-to-Cap opening breakfast.

“Cyber terrorism” is a new area of concern for the CIA, Panetta said. The United States faces thousands of cyber attacks daily on its Internet networks. The attacks are originating in Russia, China, Iran and from even hackers.

“The next Pearl Harbor is likely to be a cyber attacking going after our grid… and that can literally cripple this country,” Panetta said. “This is a whole new area of threat.”

But cyber terrorism is just one of four primary missions for Panetta, who took over directing the CIA last year after appointment by President Obama. The CIA is also focusing on counter-terrorism, reducing the proliferation of weapons of mass destruction and fighting narcotics trafficking.

Al Qaeda is becoming a viscous target, and as CIA and military operations tamp it down in Pakistan, Afghanistan and Iraq, the terrorist elements are moving to places like Somalia, Yemen and North Africa—as well changing its tactics, he said.

“The president’s direction…is we must dismantle and destroy Al Qaeda and its known elements,” he said. “It’s a fundamental mission….The primary effort takes place in Pakistan and tribal areas. We are now focused on Afghanistan and have increased our presence there.”

Meanwhile, CIA is working to help Iraqis fight Al Qaeda. “Even as our military draws down in Iraq, we’ll keep our presence there…to provide intelligence to the Iraqis so they can secure their own country.”

Worrisome, he added, is how Al Qaeda is “coming at us in other ways.” These include using individuals who have clean records and are not being tracked; individuals who are already in the U.S.A. and in contact with Al Qaeda; and individuals who decided to “self-radicalize” and are easily and quickly recruited as terrorists.

Previously, Panetta served as a congressional representative from the Monterey area, rising to the House Budget committee chair, and then latter as President Clinton’s Director of the Office of Management and Budget.

“I’ve spent most of my life on budget issues,” he said, noting the “work we did eventually produced a balanced budget for the country.” When he’s asked why he took on the job at the CIA, he told the group, “Because considering the size of the federal deficit, I’d rather fight Al Qaeda.”