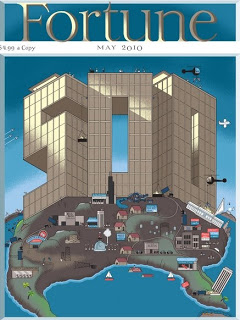 from huffpo: When Fortune magazine asked comic book artist and Oak Park resident Chris Ware to design the cover of their "Fortune 500" issue, they were probably not expecting his "beautiful and Marxist" interpretation of modern capitalism. Chicagoist reported Friday that Ware was asked to design the May cover of the magazine, but his final product, which featured "Guantanamo Bay prisoners, Mexican factory workers, and a few potshots at business execs and money-grubbing politicians" was apparently not what Fortune had in mind--they killed the cover. Still, a high-resolution version of the Ware cover is making its rounds on the Internet - and fans are delighted.

FDIC shuts down 7 banks in Illinois

Regulators seize bank linked to US senate candidate
from reuters: Regulators on Friday seized a Chicago bank owned by the family of the Democratic nominee running for the U.S. Senate seat once held by President Barack Obama. Broadway Bank was among seven Illinois banks whose failure was announced on Friday. U.S. regulators have seized 15 banks in the past two weeks, as the Federal Deposit Insurance Corp ratchets up efforts to clean up the banking industry. Regulators have closed 57 banks this year... The bank is owned by the family of Alexi Giannoulias, the first-term Illinois state treasurer who is in a tight race for Obama's previous post to be decided in the November election. The FDIC said MB Financial (MBFI.O) is assuming the deposits of Broadway Bank. Obama backed Giannoulias, a banking scion, for treasurer, and the two have played basketball together. But White House aides tried unsuccessfully to recruit other prominent Illinois Democrats to run for the seat.

Goldman Execs: We made money betting against mortgage market
from mcclatchy: In an internal e-mail released Saturday, Goldman Sachs chief executive Lloyd Blankfein wrote in November 2007 that the firm "didn't dodge the mortgage mess," but "made more than we lost" by betting against the U.S. housing market. Blankfein's e-mail, which a Senate investigations panel released with three other subpoenaed company documents, appears to contradict Goldman's denials that it profited from the subprime mortgage meltdown by secretly betting that housing prices would fall. At the same time, Goldman was selling tens of billions of dollars in risky mortgage securities. Goldman has said that its contrary bets were largely on behalf of its clients. The release of the documents sets the stage for a confrontation on Tuesday, when Blankfein and six other present and former Goldman executives are scheduled to testify to the Senate Permanent Subcommittee on Investigations, which will begin revealing the results of a yearlong investigation.

Econocrash updates:
Economic recovery is moving along quite well – for the Old Boys down on Wall Street*
Goldman 'sideshow' hyped to push through Obama banking reform*
How Goldman Sachs made $100m a day in a flash*
Tarpley: Seize & liquidate Goldman Sachs*
Banks bailed out by US taxpayers are paying us back by shorting our states & cities*
Gas jumps to more than $9 in Alaska town*
'Debt like cancer’ addressed by Obama commission on US debt*
Deficit commission's most realistic goal: Scaring the hell out of US - Featuring a symposium paid for by fmr CFR president*
Royal Dutch Shell profit surges 57%*
Greek bonds rated 'junk' by Standard & Poor's*
Iceland volcano: Airlines could get £2bn taxpayer-funded ash pay-outs*
Greece needs up to €120 billion*
S&P slashes Spain debt rating*
Eurozone edges closer to endgame as Greek contagion hits Portugal*
Trichet calls for corrupt BIS to boss global govt in CFR speech*
20 things you'll need to survive the next great depression*

The European economic crisis is not complicated 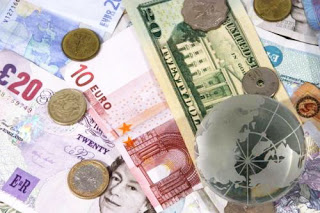 from washington's blog: You might assume that the global economic crisis is complicated. Just when it looked like things were getting better, Greece, Portugal and Spain are melting down. It's just too complicated for any layperson to understand, right? No, not really. There Wouldn't Be a Crisis Among Nations If Banks' Toxic Gambling Debts Hadn't Been Assumed by the World's Central Banks.

As I pointed out in December 2008: The Bank for International Settlements (BIS) is often called the "central banks' central bank", as it coordinates transactions between central banks. BIS points out in a new report that the bank rescue packages have transferred significant risks onto government balance sheets... In other words, by assuming huge portions of the risk from banks trading in toxic derivatives, and by spending trillions that they don't have, central banks have put their countries at risk from default. No wonder Greece, Portugal, Spain and many other European countries - as well as the U.S. and Japan - are facing serious debt crises...

Of course, Eurozone central banks - like America's Federal Reserve - create fiat money out of thin air. As I argued in March, one or the primary problems is that Europe and America have debt-based economies, and the debt-based ponzi scheme has reached it's maximum limit: Private banks don't make loans because they have extra deposits lying around. The process is the exact opposite...

The system is no longer based on assets (and remember that the giant banks have repeatedly become insolvent) It is based on creating new debts, and then backfilling from there. It is - in fact - a monopoly system. Specifically, only private banks and their wholly-owned central banks can run printing presses. Governments and people do not have access to the printing presses (with some limited exceptions, like North Dakota), and thus have to pay the monopolists to run them (in the form of interest on the loans). See this and this. At the very least, the system must be changed so that it is not - by definition - perched atop a mountain of debt, and the monetary base must be maintained by an authority that is accountable to the people.