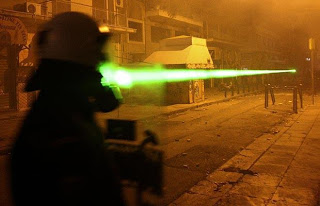 video reports cover greek civil unrest
from infowars: “It is only a small minority of people that resort to such measures like breaking and looting.” (5 more videos here)

from danger room: Police around the world use everything from sonic blasters to pepper spray to skunk bombs to plain-ol' dung to control crowds. But sometimes, the protesters can turn the tables, with tools of their own. Take this clash in Greece, where a protester uses a laser pointer to show where a riot cop is. UPDATE: As our commenters note, a laser like this can do more than just show where an officer is; it can stun that cop with an extremely bright flash of light.

trends forecaster gerald celente: greece-style riots coming to US
from paul joseph watson: Frighteningly accurate trends forecaster Gerald Celente says that America will see riots similar to those currently ongoing in Greece and that the cause will be a hyper-inflationary depression, leading to the inevitable use of troops and mercenaries to deal with the crisis as Americans are incarcerated in internment camps. As we have highlighted before, Celente’s accuracy is stunning - he predicted the 1987 crash, the sub-prime mortgage crisis and the “panic of 2008,” and is routinely cited even by mainstream news networks as highly credible. The cause of the riots would be a hyper-inflationary depression, Celente told interviewer Lew Rockwell, causing Americans to revolt in similar circumstances that we have witnessed recently in Iceland and Greece. The trouble would be sparked off by Obama declaring a “bank holiday” whereby people won’t be able to withdraw their money. “What’s going on in Greece with these riots has nothing to do with a 15-year-old boy being killed, that was only the spark that ignited the pent up, really hatred and disdain, people have for the scandals and corrupt government and the same thing is going on in this country as well,” said Celente. Celente reiterated his prediction of a revolution and riots in America, and said that the first signs of it could even emerge before the end of the year. Celente said that the troops now being brought back to America for “domestic security” would be used to suppress the riots.

update1: greek protesters take over tv & radio stations
from ap: Greek protesters pushed their way into television and radio studios Tuesday, forcing broadcasters to put out anti-government messages in a change of tactics after days of violent street protests. A group of about 10 youths got into the studio of NET state television and turned off a broadcast of a speech by Prime Minister Costas Karamanlis, station officials said. The protesters forced studio cameras to instead show them holding up banners that read: "Stop watching, get out onto the streets," and "Free everyone who has been arrested." No one was hurt, and no arrests were reported. NET chairman Christos Panagopoulos said the protesters appeared to know how to operate cameras and studio controls. "This goes beyond any limit," he said.

update3: inside account of activism in greece
from dollars & sense: I don't know if others have been following the daily news of what is unfolding in Greece. The press here has mostly reported events as another explosion of "riots" in response to a police killing, without context. In fact, what is taking place in Greece is much larger than that. In its immediate context, the uprising of the last 10 days comes on the heels of a rising oppositional movement: recently, the Greeks managed to achieve a general strike with support from 80-90% of the working population against privatization of national industries and other neoliberal policies, and for doubling the minimum wage. A broad hunger strike among Greek prisoners, with mass solidarity from Greek society, has also compelled the government to agree to the release of about half the prison population (and the movement declared that this would not be enough). The "spontaneous" anger of young people against police violence has beneath and alongside it long-standing movement structures that are allowing it not simply to "discharge" and dissipate, but to grow, strengthen itself and expand into new political areas. It is taking place in a population that is highly politicized and has a history of resistance to draw from.

from nytimes: Violence flared again in central Athens on Thursday when rioters threw rocks and firebombs at the police and tried to burn down the city’s main Christmas tree, which had just been replaced. The old tree was burned in a demonstration last week during the worst spasm of protests in Greece in years. Christmas shoppers fled the area as protesters smashed storefronts and overturned and damaged cars.