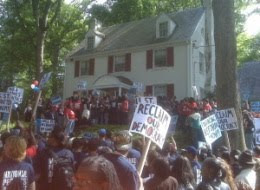 The Chicago-based grassroots organization National People's Action, in coordination with the SEIU, bused more than 700 workers from 20 states to Baer's neighborhood, one of the wealthiest corners of Washington. The action kicks off several days of protests targeting K Street for lobbyists' role in financial reform.

Baer himself went unnoticed until a neighbor outed him. The mob booed loudly as he walked into his house. "I don't have time for you," he said, according to Trenda Kennedy of Springfield, Ill. who used a bullhorn to tell the crowd about her trouble getting a mortgage modification from Baer's bank...

Passersby and dogwalkers smiled at the sight of people gathered all over Baer's lawn and blocking the road. Baer's neighbor from across the street won little sympathy when he angrily yelled at protesters for waking up his two-year-old daughter. Kennedy was one of several people who used a bullhorn to tell personal bank horror stories.

Baer, formerly a senior official at the Treasury department, is a lawyer for the bank's regulator and public policy legal group.

Econocrash updates:
Dow theorist Richard Russell: Sell everything, you won't recognize America by the end of the year*
Detroit to demolish 10,000 abandoned properties*
The extreme frustration of unemployed Americans*
The declining value of work*
11 signs the US Govt has become an overgrown monstrosity that almost every American is dependent upon for economic survival*
Almost half of US households get government benefits*
State finances rigged in conspiracy by banks, advisers*
Germany bans naked CDS against Euro-zone Govt bonds*
New book from Michel Chussodovsky - 'Global Economic Crisis: The Great Depression of the 21st century'*
Video: ottawa bank torched - direct action or false flag?*