crack the code in cybercom’s logo

"be sure to drink your ovaltine fight the net" 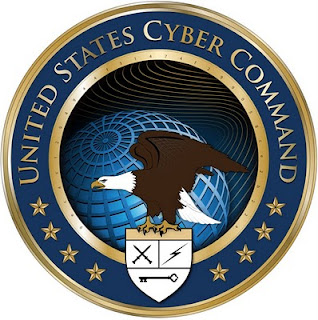 from danger room: The U.S. military’s new Cyber Command is headquartered at Ft. Meade, Maryland, one of the military’s most secretive and secure facilities. Its mission is largely opaque, even inside the armed forces. But the there’s another mystery surrounding the emerging unit. It’s embedded in the Cyber Command logo.

“It is not just random numbers and does ‘decode’ to something specific,” a Cyber Command source tells Danger Room. “I believe it is specifically detailed in the official heraldry for the unit symbol... While there a few different proposals during the design phase, in the end the choice was obvious and something necessary for every military unit,” the source adds. “The mission.”

With that hint in hand, go crack this code open. E-mail us your best guess, or leave it in the comments below. Our Cyber Command source will confirm the right answer. And the first person to get it gets his/her choice of a Danger Room T-shirt or a ticket to the International Spy Museum.

update: code cracked! cybercom logo's mystery solved
from danger room: Okay, maybe it wasn’t that much of a mystery. In fact, it took a little more than three hours your Danger Room reader jemelehill to figure out the odd string of letters and numbers in the logo of the U.S. military’s new Cyber Command. Turns out, it’s the new unit’s mission statement, translated into 32 digits with the md5 cryptographic hash:

USCYBERCOM plans, coordinates, integrates, synchronizes, and conducts activities to: direct the operations and defense of specified Department of Defense information networks and; prepare to, and when directed, conduct full-spectrum military cyberspace operations in order to enable actions in all domains, ensure freedom of action in cyberspace for the U.S. and its allies, and deny the same to adversaries.

Eventually, other commenters figured it out (especially after jemelehill’s solution made it to all the databases of cracked hashes). But that didn’t stop folks from offering their own, shall we say, creative guesses, in order to win one of two coveted prizes: a Danger Room t-shirt or a ticket to the International Spy Museum.

* “If you can read this, send your resume to jobs@nsa.gov.”
* “I’m sorry, Dave. I’m afraid I can’t do that.”
* “If the intelligence community is a family, think of us as the uncle no one talks about.”
* “Darmok and Jalad at Tanagra”
* “In God We Trust All Others We Monitor”
* “Why do people keep posting the wrong answers when someone solved it like 20 comments ago?”

Yahoo News, the Associated Press, Agence Presse France, Slashdot, El Reg, and the websites of the Washington Post and the L.A. Times all joined in the fun. The hubub even provoked this reponse from an official Defense Department blog:

I cracked the code, but you can keep my t-shirt.