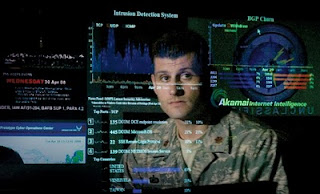 from danger room: In Washington, “cybersecurity” is a term that’s come to have a thousand meanings, and none at all. Any crime, prank, intelligence operation, or foreign-government attack involving a computer has become a “cyber threat.” But at the Pentagon, they aren’t worried about some kid painting a Hitler moustache on Defense Secretary Robert Gates’ online portrait. They’re not even that concerned about a full-scale attack on the military’s networks – even though the modern American way of war depends so heavily on the free flow of data. In the military, there’s now broad agreement that one cyber threat trumps all others: electronic espionage, the infiltration (and possible corruption) of Defense Department networks.

Well-placed spy software not only opens a window for an adversary to look into American military operations. That window can also be used to extract information — everything from drone video feeds to ammunition requests to intelligence reports. Such an opening also gives that enemy a chance to introduce his own false data, turning American command-and-control systems against themselves. How does a soldier trust an order, if he doesn’t know who else is listening – or who gave the order in the first place? “For a sophisticated adversary, it’s to his advantage to keep your network up and running. He can learn what you know. He can cause confusion, delay your response times – and shape your actions,” says one Defense Department cyber official.

My report for the Progressive Policy Institute has more.

A few months back, the Institute’s Jim Arkedis and Will Marshall asked me to put together some thoughts on military cybersecurity. I don’t consider myself much of a policy guy. But I have hung around enough folks at the Defense Department working on the issue that I figured I’d share what I’ve found — even if that risked putting me on Nathan’s dreaded list of “reporters who heart think tanks.” Read whole paper here. And let me know what you think.