from telegraph: The entertainment industry yesterday hailed the successful prosecution of the four founders of the illegal file-sharing website Pirate Bay, as a major victory in its battle to recoup billions of pounds in lost revenue... Lawyers believe that the sentencing of Peter Sunde, Gottfrid Svartholm Warg, Fredrik Neij and Carl Lundström to a year in jail for breaching Swedish copyright law could lead to a flurry of similar lawsuits as Hollywood and the music industry battles to regain the upper hand in the war against file sharing. Geoff Taylor, the chief executive of the British Phonographic Industry (BPI), which represents the UK record industry, said: “We hope that this decision will encourage British music fans to steer clear of these parasitic illegal download services and support the future of British music by downloading legally.” 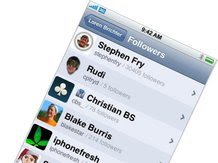 from techradar: If you're a Twitter user - and who isn't these days? - you'd better stop what your doing and step away from the computer if you want to save yourself from brain rot. That's the conclusion scientists at the University of Southern California have reached after studying the effect of today's information age on human brain development. Researchers at the college's Brain and Creativity Institute say the instantaneous, constant updates from acquaintances on sites like Twitter, Facebook and other networks are bad for emotional development. In effect, they say, the torrent of updates bludgeons the senses into a kind of torpor where young users in particular find it difficult to show compassion for others. One expert explained: "Lasting compassion ... requires a level of persistent, emotional attention. In a media culture ... indifference to the vision of human suffering gradually sets in." The work posits that the result could be a society of disconnected individuals only loosely bound by social networks and devoid of what might be considered a traditional moral compass. You have been warned.

documents: fbi spyware has been snaring extortionists & hackers for years

feds crack wi-fi to gather evidence
from threat level: Buried in the 150 pages of CIPAV spyware-related documents released by the FBI Thursday is a tantalizing nugget that indicates the bureau's technology experts have more than one way to hack a suspect. In early 2007, FBI agents with one of the bureau's International Terrorism Operations Sections sought hacking help from the FBI's geek squads. The agents were working a case in Pittsburgh, which is not described in the documents, and wanted to know "if [a] remote computer attack can be conducted against [the] target."

get yr fbi spyware documents here
from threat level: What are you doing this weekend? Cancel it! We've uploaded the 150 pages of declassified FBI CIPAV spyware documents [27mb PDF that were released to Wired.com Thursday in a Freedom of Information Act request.