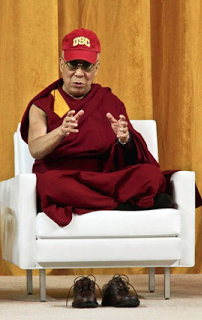 from latimes: As the leader of Tibetan Buddhism, the 14th Dalai Lama says he practices compassion to such an extent that he tries to avoid swatting mosquitoes "when my mood is good and there is no danger of malaria," sometimes watching with interest as they swell with his blood.

Yet, in an appearance Tuesday at USC, he appeared to suggest that the United States was justified in killing Osama bin Laden.

It was, perhaps, an example of the Dalai Lama confounding expectations, something he appears to relish doing. The 75-year-old leader spoke on the first day of what was to have been a four-day trip to Southern California; he was delayed by two days when he fell ill in Japan.