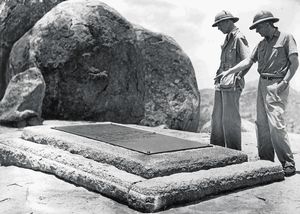 ‘Digging Up Rhodes Is Witchcraft’

from newsday.co.zw: Matopo cultural leaders yesterday condemned recent attempts by suspected ex-Zanla combatants to exhume Cecil John Rhodes’ remains from the Matopo Hills and described the intended action as “tantamount to witchcraft”. Um’thwakazi KaMzilikazi Cultural Association leader Nhlanhla Khumalo said the attempted exhumation was a defilement of the area’s traditional values and would not be tolerated. “The Matopo area is the place where Ndebele heroes lie and we will not allow invaders to tamper with the place. King Mzilikazi’s children, Lobengula’s soldiers lie there and Rhodes is there through our ancestors’ agreement,” said Khumalo. “We are very hurt to hear that people from afar wanted to tamper with his grave. In our culture such action is tantamount to witchcraft. We do not fight with bones. We defeated whites long back and it is laziness to start fighting with Rhodes’ bones.”