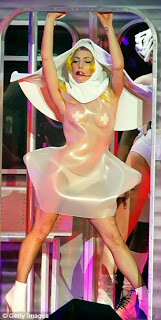 from pravda: After one of her concerts Lady Gaga was met by Christian protesters who were angry with the lyrics of the singer’s new single “Judas” and a video to the song that will be released by Easter. Believers say that “Judas” is an affront to their religious feelings. Does Gaga intend to deliberately provoke the believers by using religious symbols in her songs?

The music video to the song “Judas” has not been yet released, but some Christians are angered by the promise of Lady Gaga to release it by Easter, as well as the fact that the singer is going to appear in this video in the image of Mary Magdalene.

The GaGavision video of the pop star displays Lady Gaga departing in a limousine after a concert in support of her tour, Monster Ball, and encountering Christian protesters. “Believe in Christ, or end in hell!” said a poster held by one of the protesters. The “religious zealot” was yelling that the singer’s actions displease God and are contrary to human values.

One response to “does god approve of lady gaga’s outrageous behavior?”