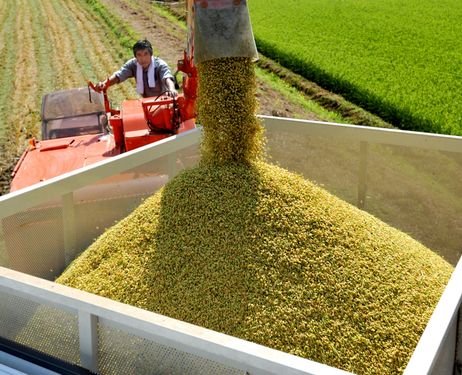 ‘Eat and Support’ #Fukushima Rice, Without Knowing and Without Choice


Once it is purchased by the national government, Fukushima rice becomes just "rice".


The reserve rice will be released to the market a few years later
as the need arises (shortage of rice, request from food companies) and
as part of the regular inventory control. The consumers won't be able to
tell it is rice from Fukushima, or the products (rice crackers, miso,
shochu, etc.) is made with rice from Fukushima.


This year, farmers in some of the areas that weren't planted because of the nuclear accident (i.e. former evacuation zones)
are happily growing rice with full intention of selling to consumers as
long as it is judged "safe" (i.e. testing below the national
government's safety standard of 100 Bq/kg of radioactive cesium).


From an article on January 24 this year that appeared in a Fukushima local paper (Fukushima Minpo, the link already expired), archived at this blog:

"Of
the 250,000 tonnes of 2013 rice that the national government plans to
buy from farmers and distributors for its rice reserve, Fukushima
prefecture has asked for 40,000 tonnes allocated for Fukushima, the largest amount in the country,
and the request has been approved. The amount is about 200 times more
than 214 tonnes in 2012 that were actually purchased by the government. Since
the price of rice for the rice reserve is determined by auctions, it
won't be affected by baseless rumors after the Fukushima I Nuclear Power
Plant accident. Farmers in the areas set to resume
rice-growing fear the price drop. The prefectural government will
encourage these farmers to utilize the rice reserve system."

The
prefectural government explained to municipal officials in a meeting
regarding the rice growing in 2013 on January 23 in Fukushima City.

According
to the Ministry of Agriculture, Forestry and Fisheries, the bidding is
done by open bidding. There will be several biddings from January to
June, before the planting. Farmers and distributors registered [with the
Ministry] can participate, and the lowest bid will be successful. In
case of Fukushima Prefecture, farmers and distributors can bid until the
allocated 40,000 tonnes are bought by the government.

The
purchase price by the government will apply to all rice, and the
average price for the 2012 rice was 13,406 yen per 60-kilo bag.
According to the Ministry of Agriculture, the price is "equivalent to
the market price when transportation costs and sales and promotion
expenses are deducted".

However, since the bidding is done before the
harvest, it is possible that the price will be different from the market
price.

In order to encourage more bids, the bidding allocations for prefectures have expanded for the 2013 rice. Fukushima
Prefecture applied for 40,000-tonne allocation in order to "meet the
demand from farmers" as a countermeasure against baseless rumors.
The prefectural government will encourage farmers to utilize the system
by pointing out the merit that a certain level of income is guaranteed
under the system.

According to the prefectural government, Fukushima had 360,000 tonnes of rice harvested in 2012.

So,
Fukushima Prefecture is planning on selling over 11% of this year's
harvest to the national government, who buys up rice using taxpayers'
money.

According to the Ministry of Agriculture (February 2013),
Koshihikari rice grown and harvested in "Nakadori" in Fukushima
(including cities like Date, Fukushima, with high soil contamination) in
2012 was selling for 15,034 yen per 60 kg bag in the open market as of
December 2012, which was about the same price level as rice from other
prefectures.

And that was the lowest-priced rice from Fukushima. Go figure.

The latest auction results announced by the Ministry of Agriculture (5/28/2013) shows 11,000 tonnes of rice from Fukushima Prefecture have been purchased by the national government in 8 auctions.