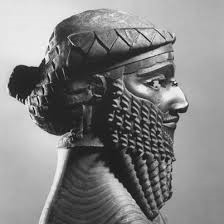 Empire by Sargon the Great

from fsmitha.com:  "The Sumerians had a salinization problem. Evaporating water left behind layers of salt, and rising water tables brought more salt to the surface. Sumerians wrote of the earth turning white. A solution to the problem was to leave lands not watered for many seasons, to let the water table fall and let rain wash the salt down far below the surface. But this would have taken years. It was not done. Wheat is less tolerant of salt than barley, and Sumerian clay tablets describe the Sumerian diet changing from wheat to barley. Then the growing of barley and other crops diminished and the Sumerians suffered from hunger, malnutrition and disease. A Sumer weakened has been described as unable to defend itself.

Those who conquered the Sumerians were a Semitic people. A dynasty of Semitic kings came to rule the city of Kish. There, perhaps around 2200 BCE, a former cup-bearer to one of these kings overthrew the ruling dynasty. With good military tactics that included holding and fighting from high ground, he extended his rule. He defeated the Sumerian king of Nippur, where the Sumerian god Enlil was believed to dwell. He claimed that his victories were given to him by Enlil. And he became known as Sargon the Great."

Sargon established his capital near Kish, at a city called Agade [note], and his kingdom became known as Akkad – derived from the name Agade. His warriors became an aristocracy that lived off the taxes collected from conquered farmers and artisans. And his empire became commercial, with fortresses at strategic points along its trade routes. These were times in West Asia (the Middle East) when bronze weapons had replaced those of stone, and supplying an army with bronze weapons required control over trade routes that gave access to the tin and copper from which bronze is made. Perhaps responding to this need for tin and copper, Sargon extended his empire northwest into Syria, and some scholars speculate that he crossed the Taurus Mountains and extended his empire into the center of Asia Minor. He placed governors throughout his empire to rule in his name. He built himself a library of thousands of clay tablets. And to help unite his empire he built an efficient system of roads and a postal service.

Sargon passed power to his son, creating a new dynasty of kings. Around 2150 BCE, during the rule of Sargon's grandson, Naramsin, a wave of nomads called Gutians, from the east, overran Agade and Sumer. Why Naramsin was unable to defeat the invaders is unknown. His empire may have been weakened by drought and famine or by plague. But like the Sumerians, the Akkadian people saw adversity as the work of displeased gods, and they interpreted the Gutian invasion as the result of their goddess Inanna having left their city because of Naramsin's sins.

After only a hundred years Sargon's empire became a memory, but Sargon remained as a legend. It was said that Sargon's mother had abandoned him in a cradle of reeds, that she had placed the cradle on one of Mesopotamia's great rivers and that Sargon had been found and adopted by Sumerians – a story similar to one which would emerge centuries later about a man called Moses.

Revival and Demise of the Sumerians

After the fall of Sargon's empire, war erupted between the Sumerians and Gutians, and the Sumerians exterminated or evicted the Gutians. Sumerian civilization revived, including rule in the city of Ur by a king called Ur-Nammu, who, around the year 2050, created the first known code of laws. Ur-Nammu created retribution and punishment in the form of fines, superseding the justice of an eye for an eye and tooth for a tooth. He was described as having removed the "grabbers" of the citizen's oxen, sheep and donkeys, as having established laws that guarded an orphan or widow from anyone who might wish to exploit them, and as having guarded the poor from the rich.

The Sumerian renaissance lasted until about 1950 BCE, when Sumer was attacked by Elamites from the Zagros Mountains, just east of Mesopotamia. And Sumer was attacked by a Semitic speaking people from Syria who became known as Amorites (a word meaning westerner). The Amorites sacked and burned Sumerian cities. And Sumerians wrote lamentations, complaining that the blood of their people filled holes in their grounds like hot bronze in a mold. They wrote of bodies dissolving like fat in the sun and their cities covered with a shroud of smoke. What weakness if any among the Sumerians prevented them from successfully defending themselves remains unknown. But the Sumerian writers of lamentations saw their demise as the result of their gods having abandoned them like migrating birds.

The Amorites overran much of Sumer and settled along the Euphrates River just north of Sumer, where they founded the city of Babylon, and the Amorites settled to the north, along the Tigris River, in an area that included the city of Ashur. A Sumerian had described the Amorites as nomadic: as a people knowing no submission and having no house in their lifetime. The Book of Genesis in the Old Testament describes an Amorite as the grandson of Ham, youngest son of Noah, and describes an Amorite and other descendants of Noah as living between "the river of Egypt" and the Euphrates (Genesis 10:1-16 and 15:18-21). And in Amos 2:9, Amos describes the Amorites as being as tall as cedar trees.

By 1800 BCE, salinization had greatly diminished agriculture in southern Mesopotamia from what it had been many centuries before when Sumer was a more densely populated land.