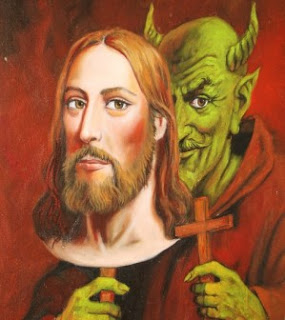 the end of days? so many antichrists, so little time

from news junkie post: Amid the current scandal involving Pope Benedict XVI, speculation has increased that perhaps Christs very own vicar on earth is none other than the great deceiver. The Antichrist, the harbinger of the end-times, the deceiver who hides behind a facade of goodness. Joseph Ratzinger is a past member of the Hitler Youth and current pederast enabler, cloaked in his holy vestments, holding the faith of billions in the palm of his hands. Many seem to think that the only way to see him clearly is through the nebulous lens of biblical prophecy.

Many evangelicals believe that the Antichrist, or Beast, is a political leader that will carry a message of hope for the people of the world. Many of those same evangelicals believe that there are, in fact, more than one Antichrist working in concert to usher in the end times. The first would be the political leader, followed by a religious leader who gives credibility to the first. The second beast of the book of Revelations would then encourage the masses to first accept, then trust, and finally worship the first beast...

What we must come to realize is that the Antichrist is nothing more than a bogeyman for grown-ups. He’s the monster under the bed and the villain in the closet. He is the Kaiser Soze of the irrational and the biggest and scariest of the imaginary things that go bump in the night. He is the name we give to those who have lived and killed among us on the grandest of scales. He is the bogeyman’s bogeyman.

The Antichrist lives only in our ignorance and abides there from generation to generation and from age to age, from Attila the Hun to the next despot in waiting. The Antichrist is no more a reality than the perpetually unfulfilled prophecies of the Bible. It’s time for us to outgrow the ghost stories fabricated during societies infancy and embrace the future with enlightened maturity.

related: catholic hotline in meltdown over paedophile priests*
pope's immunity to prosecution may be challenged in uk*
during easter mass, ratz remains silent on pedophilia scandals*