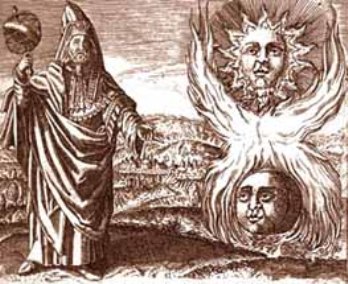 Esotericism, Freemasonry, And Confusion In The Lodge

from peopleofshambhala.com: “Esotericism” has come to be a kind of “catch all” phrase for alternative and non-Western spirituality, Freemasonry, the occult, and so on, not least of all as a way of making subjects previously taboo within academia acceptable subjects of research for books and PhD theses.

While we will undoubtedly learn more and more about once obscure but nevertheless highly influential societies and movements — which can only be good for our understanding of history and how the world has come be the way it is — there appears, to me, to be confusion about what “esotericism” and “esoteric” actually mean. We hear, for example, that Wicca is an “esoteric religion.” Traditionalist, and onetime Sufi initiate Frithjof Schuon likewise described Christianity as an “exo-esoteric” religion, claiming that it taught an essentially esoteric doctrine to the masses. And postmodern, New Age-like fusions of different religions and mythologies are also proclaimed “esoteric”.


The problem with such claims is that once an esoteric (inner) doctrine is becomes an independent belief system in itself it, in effect, is rendered exoteric (outer). Hence we have Christian fundamentalism, Christian Zionism, etc., but — and I say this as someone who has stayed regularly at one Christian monastery — very little in the way of Christian spiritual practices. Likewise, we have various political manifestations of Wicca, which has fought to be recognized by the state as a religion — as if state recognition would be of any interest to esotericists.

This does not mean that there is not an esoteric center to either Christianity or Wicca. Of course, this exists. In the former, for example, there is everything from the Carthusians, who live their lives as hermits, to Martinism. Remarkably, theologian Hans Urs von Balthasar even wrote an afterword for Meditations on the Tarot. If you think this was a fringe figure he was respected at the highest levels of the Church, long after this was published, and was praised by Pope Benedict — you know, the one you think is a Right-wing fundamentalist — among others.

There are four essential criteria, I believe, to authentic esotericism.

First of all, it contains the belief that spiritual truth and understanding is revealed, and grasped, in stages, so that the initiate is led further from the material to the Divine. In Freemasonry and many esoteric and occult Orders, this development is signified by the candidate moving through various Degrees, and experiencing the rituals and symbols associated with them.

Secondly, as an inner understanding, the esoteric is viewed as related to the outer. That is to say that a religious  teaching has one meaning for ordinary members of the faithful, and another for its most spiritual — who generally practice quite differently, as is the case with Christian monks, Muslim Sufis, and Hindu Tantrikas.

Thirdly, the esotericist is attempting to experience being absorbed in God or Divinity.
Fourthly, that the esotericist attempts to pierce the meaning of various symbols, words, etc., to come to an ever more precise and metaphysical understanding.

In relation to the last, for example, in Freemasonry there is the symbol of the letter ‘G’. Representing God and Geometry, the Freemason comes to understand that it is, at a more esoteric level, representative of “the Great Architect”, i.e., the idea that God and geometry are not only related, but that the latter can reveal something about the Nature of the former.

Likewise, there is the Masonic symbol (or “emblem”) of the beehive. Officially it is said to represent “industry”. Yet, it can hardly have escaped early Freemasons that the beehive is constructed through hexagonal cells. Johannes Kepler (1571-1630) had even used the example of the honeycomb in his thesis on geometry, The Six Cornered Snowflake. He also discussed in this thesis the pomegranate and lily, both of which can be found in the Masonic Lodge. In other words, the exoteric meaning of the beehive in Freemasonry relates to the community and work of the bees, while an esoteric understanding is that it is an essentially geometric object that is created.

In summing up, then, the esoteric is not something that is self-contained (as a religion in itself), but requires an exoteric (outer) form, i.e., the doctrines that are given to all, regardless, and it is the penetrating of these doctrines, to find deeper, more spiritual forms of meaning and being that constitutes esotericism. Usually this occurs through stages, and, as Traditionalists and many others now propose, at the deeper levels, the different religions can be understood to represent the same Mystery. But that requires seriousness of mind.