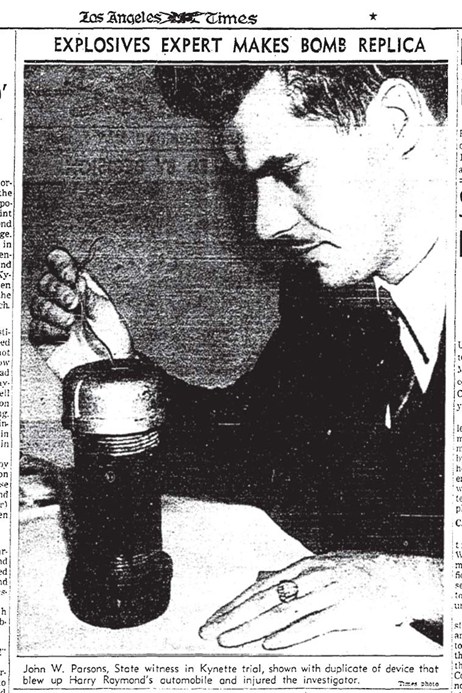 Occultist father of rocketry ‘written out’ of Nasa’s history

from www.wired.co.uk: Jack Parsons was a founding member of Nasa's Jet Propulsion Lab, with some crediting him as being one of the "fathers of rocketry" and others joking that JPL was actually Jack Parsons' Laboratory, but you won't find much about him on Nasa's websites. Parsons' legacy as an engineer and chemist has been somewhat overshadowed by his interest in the occult and, and has led to what some critics describe as a rewriting of the history books.

"He's lived in the footnotes since his death. He's a forgotten figure," says biographer George Pendle, author of Strange Angel: The Otherworldly Life of Rocket Scientist John Whiteside Parson (Jack's full name).
Pendle did an "archeological dig" into Parsons' life after finding a mention of him in a science book. "The more I dug, the more bizarre and extreme the story seemed."

In short: Parsons played a critical role in the formation of rocket science and was instrumental in building the rockets that were eventually used in the Space Race. However, he also believed in magic, was involved in the early stages of Scientology and had an extremely colourful sex life. For that reason, Pendle speculates, Parsons' was a figure who didn't fit into the mould of the Industrial Complex. "Wernher von Braun -- a former Nazi -- was much a much easier fit than Parsons," says Pendle. "A lot of people would be shocked to find out that the space programme was founded by a man who held orgies in his Pasadena mansion."

Parsons' interest in chemistry stemmed from his teenage years when, inspired by space travel found in science fiction literature, he started amateur rocket experiments with a school friend called Edward Forman. He later studied chemistry and high school and took a holiday job at the Hercules Powder Company, where he got to handle a wide range of explosives.

After school, Parsons was keen to access the rocketry facilities at Caltech but his academic ambitions had been plagued by financial difficulties. He and Forman ended up teaming with a PhD student called Frank Malina to apply for funding from the university to explore rocketry. They didn't reveal their ambition to develop rockets for space exploration as this was, at the time considered to be a science fiction. At the university's Guggenheim Aeronautical Laboratory, the trio collaborated on developing rockets in a creative and liberal environment as members of the GALCIT Rocket Research Group.

The group -- which increased in numbers over the next few years -- set about developing a static rocket-motor before moving onto working rockets. The team became known as the "Suicide Squad" on campus because of how dangerous their experiments were, but eventually had success in building a static rocket that could burn for more than a minute.

In the late 1930s, Parsons started to develop an interest in esotericism, attending something called The Gnostic Mass at the Church of Thelema. Parsons came to believe in magic, a force that he felt could be explained through quantum physics, as espoused by Thelema's founder Aleister Crowley.

"He was good with things that went boom -- so au fait with rockets and explosives," says Pendle.

As Parsons' interest in the occult developed, his colleague Malina approached the National Academy of Sciences for funding into "jet propulsion" as a means for developing more nimble aircraft. The team was granted $1,000 (£595 at today's exchange) -- the first government-funded rocketry research group in history. A quarter of the funding had to go towards repairing damage to Caltech buildings caused by the group's experiments and the group was eventually forced to relocate to some iron sheds in the Arroyo Seco canyon, where they were closely watched by the FBI which was keen to make sure that no political extremists were accessing the explosives. It was here that the Jet Propulsion Laboratory would be founded.
One of the group's key innovations was developing Jet-Assisted Take Off (JATO) engines for the US Air Corps, with Parsons developing a restricted burning solid rocket fuel that was stable enough to be stored indefinitely. The engine technology and fuel were commercialised through a company called Aerojet, where Parsons became project engineer. Versions of this fuel was eventually used by Nasa in the Space Shuttle as well as in military ballistic missiles.

At the same time -- 1941 -- Parsons started to have a sexual relationship with his wife's Helen's 17-year-old sister Sara -- something that was encouraged by his church. His wife started a relationship with one of the church's most senior members, Talbot Smith. The four of them, along with other Thelemites ended up moving into a large house together in Pasadena. Drugs flowed freely, as did sexual partners. The lodge attracted negative attention, with the police and FBI receiving allegations that it played host to a cult involved in sexual orgies and black magic -- although upon investigation, it was deemed not to represent a threat to national security.

The US government heard that Nazi Germany was developing the V-2 rocket and so gave the GALCIT rocket research group -- now without Parsons -- a grant to develop rocket-based weapons and the group was renamed the Jet Propulsion Laboratory. At around that time Parsons was expelled from Aerojet by new majority shareholders who disapproved of his "unorthodox and unsafe working methods". Parsons and Forman moved onto found the Ad Astra Engineering Company.

"After his girlfriend ran off with Hubbard, he decided to create his own girlfriend and summon an elemental," explains Pendle.


Poetry for his 'elemental'

After one such ritual in 1946, Parsons decided that he had managed to conjure up his perfect woman. So when he came into contact with Marjorie Cameron, he was convinced she was the one. "He felt as though his elemental had arrived," says Pendle. Cameron had no idea that she had been "invoked" in this way. She became his muse and was the subjet of a book of poetry Parsons wrote at the time.
"When you think about scientists, you don't think of them as necessariy being fun or having a creative side. But Parsons saw himself of being at the end of the line of a group of scientists stretching back to Newton, who saw himself as a natural philosopher," explains Pendle. "Newton wrote about alchemy. Poetry used to be part of what the scientist was. He was a renaissance man with a whole swathe of interest."

When Parsons worked on his rocketry experiments in the desert he would recite a pagan poem to Pan. Pendle doesn't see this as particularly strange, saying, "They were all young guys, it would have been like going into a huddle and shouting the name of your team."
Parsons' financial fortune fell apart after he invested his life savings in co-founding a company with Hubbard and Sara -- his ex-girlfriend and her current primary partner. Hubbard convinced Parsons he was going to buy yachts and resell them at a profit, but this never happened. Parsons lost the vast majority of his money in the scam, the company fell apart and eventually Hubbard and Sara went on to found Scientology together.


Shunned in the Cold War

Parsons remained a specialist in rocketry and was often called as an expert witness in police investigations involving explosives. "He was good with things that went boom -- so au fait with rockets and explosives," says Pendle.

As the Cold War set in, any academics suspected of being communist sympathisers were frozen out. Parsons and many of his colleagues lost their security clearance, leaving him unemployed. He found himself earning money as a manual labourer, a hospital orderly and a car mechanic. Having been pushed out of science, Parsons became even more deeply entrenched in the occult.
He ended up applying his skills to create pyrotechnics and explosives for the film industry. Just before a planned trip to Mexico in 1952, Parsons -- who was 37 -- received a large order of explosives for a movie. While preparing the order, there was an explosion involving mercury in which Parsons suffered fatal wounds -- some of his friends suspected a state-sponsored consipiracy although it was ruled an accident.

To mark the centenary of Jack Parson's birth in 1914, Fulgur Press is publishing a collection of Parsons' poems -- Songs for the Witch Woman -- which he wrote about Marjorie Cameron. It provides an intimate glimpse into the final years of their relationship which was cut short by his untimely death. Cameron provides the illustrations. "In the poems, he's writing to what he saw as a magical creature," explains Pendle.
"Parsons uses imagery that is pretty far out," says Pendle, mentioning a "vision of a girl and goat dancing together in a satanic ritual", where the girl is more fearsome than the goat she's dancing with. "This is how he saw his relationship with Cameron. She was a girl he'd summoned but he was also terrified of her."
Many of the poems are "about a hidden world beyond the view of normal mortals", Pendle says. "Parsons had his rocketry as well as his normal life. He discovered other worlds by imagining going in a rocket to the Moon. He wanted to explore this new frontier. He saw both space and magic as ways of exploring these new frontiers -- one breaking free from Earth literally and metaphysically."
In the end it was Parsons poetry and other interests that ended his career in rocketry. "The government doesn't really want any people with quirkiness," says Pendle. "With all of the rumours about the Pasadena lodge, the magic and chanting poems at rockets, he couldn't fit into a government job."

In Pendle's view, Parsons is the founding father of rocketry and should be recognised as such. This sentiment is echoed by a number of his colleagues, including Wernher von Braun and Malina, who felt as though his contributions to American space technology had been neglected. "If you are looking for a conspiracy it's not his death, it's why he's been wiped from history. There is much more room for mavericks now than there was in the 1940s and 50s."

"He's not really mentioned in a tour of the Jet Propulsion Laboratory, there's no mention of him as a founder," continues Pendle. "He may be referenced briefly in the footnotes, but it's the occult side of his life that keeps his light burning, not the science."

Wired.co.uk contacted JPL and we asked whether Parsons had been written out of the history books. Historian Erik Conway said: "Jack Parsons is included in history books and other venues, and in fact, his role is discussed in the JPL-involved standard history, JPL and the American Space Program by Clayton R. Koppes. Parsons was one of the original founders of JPL. He was the team's chemist and developed the first castable solid propellant used to power aircraft."