Espionage and Occultism: The True Nature of Secret Societies 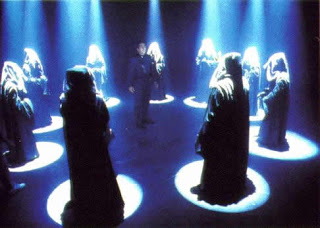 from jwmt.org: For as long as the hairless, semi-domesticated Killer Ape has been making war on the tribe next door, there has been espionage; spying, sabotage and subversion, intrigue, double dealing and power grabs, all of which can be considered as varieties of espionage. In their original sense, these activities were simply forms of politics, a sort of tertiary boundary layer that served as social and political sensory organs. But the skin that touches can also be the hand that grips, and soon after humans stopped roaming and began to build villages and farms, covert, or hidden, forms of political feedback, espionage, settled firmly into the mode of control apparatus.

As such, it shifted from a political to a religious framework. Information gathering and maintaining cultural superiority became the responsibility of the great religious organizations and priesthoods. By the time of the late Roman Empire, when Church and State had effectively merged, espionage, in the official and political sense, was a function of the Church. Due to its monopoly on literacy, the Church remained in this position right up to the Renaissance.


However, it was that same monopoly that allowed another form of espionage to survive. The pagan, and therefore oral, traditions survived in various forms, and this oral tradition was supplanted by a curious phenomenon, the traveler’s tale. Ideas and heresies traveled along this tall tale highway as pilgrims and healers and mystics traveled from Spain to Russia, Jerusalem to Norway. Along with them moved tinkers and peddlers, adventurers and freebooters, the restless and the dispossessed, and eventually all of these groups would form provisional “tribes” and guilds. By the late Middle Ages, this underworld had become a powerful and authentic alternative culture that viewed espionage, information collecting, as a kind of commodity trading. Knowledge of stone working, soldiering or counterfeiting was proprietary to the group or tribe, tricks of the trade we might say, but available to the official culture for its use.

The Church began to lose its real power with the Black Death of the late 14th century, and within a century, a cultural Renaissance was underway. Part of that Renaissance was the emergence of what had been sub-culture in the medieval world into the official high culture. The sections of the medieval underworld that underwent the greatest transformation were occultism and espionage. The rulers of the new states that were forming in Italy and Western Europe were more than happy to make use of both groups, no matter what the increasingly discredited Church thought about it.

As the Reformation and Counter-Reformation battered Europe in the 16th century the golden age of occultism and espionage began. With Europe split along ideological lines, north and east Protestant, west and south Catholic, the opportunities for both professional spies and revolutionary minded occultists seemed limitless. Elizabeth I and Phillip II of Spain went toe to toe over the whole issue of Protestant versus Catholic, culminating in 1588’s Armada, and achieved a draw. But, far to the east, the junior branch of the Hapsburg clan, Rudolph II, followed an entirely different path, one of tolerance and humanism, flavored of course by a large dollop of mysticism. We can think of these two styles, conflict versus conciliation, and power centers/conflict points, as the poles or axis of the age, around which swirled both the best of the new “magi” and the rising profession of spy.

This golden age of espionage and occultism is the true origin point of our modern “secret societies.” The Rosicrucian movement of the early 17th century grew at least in part from Dr. John Dee’s apocalyptic missionary work in the 1580s, who, as Elizabeth I’s 007, is a prime example of the era’s overlap of occultism and espionage. These secret societies, instead of being either chivalric or guild based, were in fact more like a loose network of co-conspirators. Where they did collect into localized groups, they tended to form the early scientific organizations, the Royal Societies of England and France.

Between Dee and Bruno’s Hermetic Revolution of the late 16th century and the end of the religious wars in the late 17th century, new and very radical political ideas emerged. Democracy had been demonstrated when the people of England killed their King rather than go back to Catholicism; it wasn’t pleasant but it showed where the power actually lay in the new post Renaissance world. This split however led directly to the next round of “secret societies.”

Freemasonry, which had nothing to do with the stone mason’s guild of the Middle Ages, formed as a way to promote several different, and sometimes conflicting, political agendas. One of these was the preservation and restoration of the Stuart dynasty to the throne of England, while another was the attainment of a true democratic state, free from both kings and Church. These agendas were held together with the solid glue of occultism.

The ideals of these secret societies, derived ultimately from the occult humanism of the Renaissance, contributed to real revolutions, in America and France in the late 18th century. In the early 20th century, the swirl of occultism and espionage around the last Czar and his family produced a spontaneous revolution and the end of the Romanov dynasty. And of course, Hitlerian Germany was a product of the same overlapping confluence of occult concepts and direct espionage, and the same secret society-based mixture influenced even FDR’s New Deal. As late as the end of the 20th century, this same combination of influences would be used as a rationale for the genocide in the Balkans.
For the last 450 years, the search for esoteric knowledge and the practice of espionage have mingled and produced, sometimes, revolutionary results, both good and bad. Our modern world grew out of some of these results, and our awareness of that fact may allow us to reach back to that original humanism, that spark of democratic shamanism, that gave rise to the impulse to share our mystical experiences with the rest of the tribe.