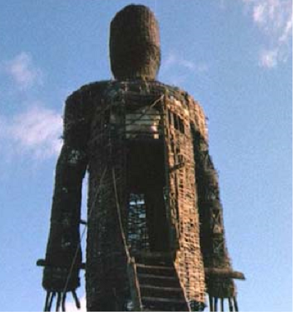 The Wicker Man: The Return of the Pagan World

The late Philip Coppens covers occult appeal of 1973 edition of movie, "The Wicker Man,"  in his article, "The Wicker Man: The Return of the Pagan World." Title suggests paganism may be growing?  Are people simply tiring of same old routine and seek something new?  In this case, what was once old - paganism - becomes new again as alternative faiths are pursued.  Is it the case people want to let down their hair and throw off restrictions of their current faith?  Perhaps, mankind descends into beastly deeds periodically, out of some sense of adven- ture, only to be shocked at their own behavior?   Coppens describes central story:

"...police officer Howie, who comes to the Isle of Apples – Avalon – in search of the mysterious disappearance of a schoolgirl, Rowan Morrison. Unaware that he is being manipulated by the local population, he eventually learns he has been a fool… and will suffer the fool’s fate: he will be sacrificed, in his role as king (representative of the law), fool (which he clearly is) and virgin (he is reserving sexual activity until he is married). In the role of king, he is the substitute of the true power of the islands, Lord Summerisle. Howie himself, now aware of the fate that will befall him, prophesizes that if this year the crops will fail again, a substitute will no longer suffice and the king himself will have to make the final sacrifice himself. That sacrifice is his burning to death, inside the Wicker Man. With his sacrifice to the pagan god, Howie now becomes like Christ, his example, himself: he is sacrificed for the goods of Mankind – the people of the Earth."

The Killing of the King Rite seems readily apparent in story? Occultists on island sacrifice an intruding policeman in their wicker man effigy in the hope of guaranteeing a good crop of Apples in the next harvest.  Coppens informs:

"A Wicker Man was indeed used to offer sacrifices to the gods. The victims were animals and humans, the latter often prisoners, taken during wars or convicts found guilty of a crime deserving death. The origin of human sacrifice is almost certainly Caesar's account of the druids in his Gallic Wars. Caesar describes a ritual in which large, compartmentalized wicker effigies were filled with grains, small animals, and even human slaves, before being burned as sacrifices.
The burning of effigies is one of the oldest and most widespread forms of pagan (and indeed human) worship."

A pagan practice dating to time immemorial, perhaps, the burning of effigies may be making a comeback in wider culture?  A case of what was old becomes new again?