Lehman Collapse: What Did Geithner know & When Did He Know It? 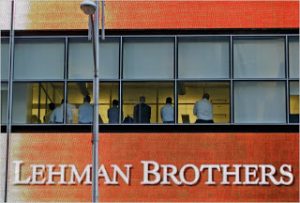 from allgov: Lehman Brothers managed to conceal from the outside world a multi-billion-dollar mess that was years in the making, according to an audit investigation released last week. But the size and scope of Lehman’s manipulative accounting has led some Wall Street critics to wonder what the New York branch of the Federal Reserve — led then by current Treasury Secretary Timothy Geithner — knew about the scheming that eventually led to the venerable bank’s collapse in 2008.

The audit report by Anton Valukas, the United States Trustee in the Lehman Brothers case, states that Lehman executives carried out “materially misleading” accounting tricks that hid billions of dollars in debt from regulators. Known internally as “Repo 105,” the bank’s leaders began as early as 2001 to move huge amounts of money—eventually $50 billion—off its books to “conceal its dependence on leverage, or borrowed money,” as The New York Times put it. “Repo” stands for “repurchase agreement,” or extremely short-term loans.

But Yves Smith of Naked Capitalism wonders if Lehman realistically could have hidden a fraud so large from the New York Fed, given Geithner’s close relationship with leading figures on Wall Street. “It also emerges that the NY Fed, and thus Timothy Geithner, were at a minimum massively derelict in the performance of their duties, and may well be culpable in aiding and abetting Lehman in accounting fraud and Sarbox violations,” writes Smith, referring to the Sarbanes-Oxley Act of 2002. “We need to demand an immediate release of the e-mails, phone records, and meeting notes from the NY Fed and key Lehman principals regarding the NY Fed’s review of Lehman’s solvency.”