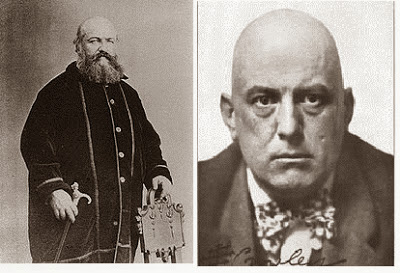 Fathers of the Modern Occult Revival

George Sieg cites two figures in 2010 Examiner brief as "Fathers of the Modern Occult Revival," during 19th Century. Sieg names Eliphas Levi and Aleister Crowley. Levi, best known as creator of the goat-headed Baphomet, whose occult career, is summarized, in excerpt from article below:

"Alphonse Louis Constant was born the son of a Parisian cobbler in 1810. His first vocation was to the Roman Catholic priesthood, but he was never ordained due to abandoning his seminarian studies for romantic reasons. After leaving the seminary, his involvement in radical left-wing politics and publication of subversive tracts in 1848 landed him in prison twice. In 1854, a year after he met English Rosicrucian novelist Edward Bulwer-Lytton, whose book Zanoni famously described esoteric initiation and spiritual conflict between black and white magicians, Constant wrote his famous masterwork The Dogma and Ritual of High Magic. He had Hebraized his name into Eliphas Levi, due to his conviction that the Hebrew Qabalah provided a sound basis for Western magic. His work introduced the term 'occultism' to the world, and it proposed a universal secret doctrine hidden within and behind all esoteric systems of belief and initiation. His contributions to the theory and practice of modern occultism include esoteric correspondences of Tarot and the development of the idea of ‘astral light’ as a fluid medium for magical force. He also created the famous image of ‘Baphomet,’ an idol allegedly venerated by the supposedly heretical Knights Templar, in which the entity appears with a goats head and the symbolism of all alchemical opposites united into a simultaneously humanoid and bestial hermaphrodite..."


Sieg reminds reader "...other major 'father' of the modern occult revival, Aleister Crowley, took the name ‘Baphomet’ as his moniker as head of the Ordo Templi Orientis, a German order of Templar Freemasons." The article captures Crowley's career:

"Ultimately he determined that worldly ambition was futile and resolved to become an occultist, leaving the university without a degree. His esoteric quest led him to the Hermetic Order of the Golden Dawn, one of two major occult orders in England and heavily influenced by the work of Eliphas Levi, the other order being the Hermetic Brotherhood of Luxor. The founders of these groups are interesting figures in their own right, and appear as the 'uncles' of the modern occult revival. Their success was mainly collaborative, and their renown continued by the occult institutions they established. Crowley became close to the leader and main founder of the Golden Dawn, Samuel Lidell ‘MacGregor’ Mathers, supporting him in a conflict against other leaders of the Order. Crowley's assistance to Mathers ultimately helped break up the Golden Dawn entirely, leaving Crowley as the most notorious figure of the European occult scene of his day. He would go on to be a prolific occult writer, founder of one order (the Argentium Astrum, meaning 'silver star' in Latin) and leader of another (the O.T.O.), a figure of sensationalism and scandal (dubbed ‘the wickedest man in the world’ in the tabloid press), and proclaim himself the prophet of a new religion (Thelema) for a ‘new aeon,’ meaning ‘new age.’ In addition to his religious philosophy of the ‘True Will,’ the inherent purpose and destiny of every individual..."

Levi and Crowley are pivotal figures in the 19th Century occult revival movement. An occult bent to American culture already evident, could wash over us if we're not careful! Beware, you've been warned!