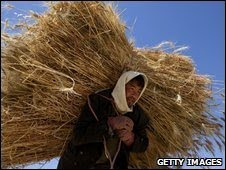 from bbc: Food production will have to increase by 70% over the next 40 years to feed the world's growing population, the United Nations food agency predicts. The Food and Agricultural Organisation says if more land is not used for food production now, 370 million people could be facing famine by 2050. The world population is expected to increase from the current 6.7 billion to 9.1 billion by mid-century. Climate change, involving floods and droughts, will affect food production. The FAO said net investments of $83bn (£52.5bn) a year - an increase of 50% - had to be made in agriculture in developing countries if there was to be enough food by 2050.