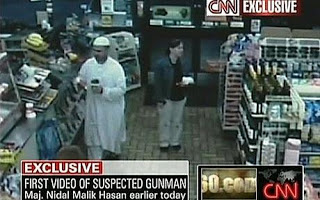 from paul joseph watson: The Empire strikes back – right when when public support for the occupation of Iraq and Afghanistan sinks to all time lows, an anti-war Islamic extremist with links to suicide bombers goes on a shooting rampage at a U.S. army base, reinvigorating support for the war on terror and demonizing opposition to it as anti-American extremism. The scam would be believable if it wasn’t so perfectly staged.

Without getting into convoluted conspiracy theories about mind control and whatever else, not that they aren’t without merit, the facts we already know about Hasan and his behavior prior to the deadly shootings just screams out “patsy” and “set-up” and almost exactly mirrors other terror scams the Empire has run in the past.

Just like the would-be liquid bombers that were supposedly planning on bringing down multiple airliners in August 2006, who were caught on CCTV buying bulk supplies of cake in the very hours before the plot, Hasan’s pre-shooting behavior contradicts completely the idea that he was preparing for a deadly rampage.

Shortly before the massacre, Hasan was caught on camera shopping at the convenience store located on the army base – laughing and joking. Is this the behavior of a man psychologically readying himself for the high-intensity horror of gunning down dozens of his colleagues, or someone unaware of what was to follow?

We learn that Hasan “Showed no signs of worry or stress when he stopped at 7-Eleven for his daily breakfast of hash browns, said Jeannie Strickland, the store’s manager." "He came in (Thursday) morning just like normal,” she said, “nothing weird, nothing out of the ordinary." 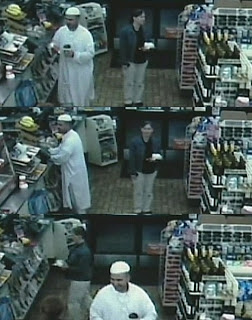 The Smiling Assassin? Hasan’s pre-rampage behavior is completely at odds with the idea of him preparing to massacre more than a dozen of his colleagues.

Just like the 7/7 bombing patsies who were filmed laughing and joking, getting into arguments and generally doing everything a terrorist would want to avoid, Hasan’s pre-attack behavior should set alarm bells ringing.

Just like the 7/7 bombing patsies and the liquid bombing patsies, the description of Hasan by those reinforcing the official characterization of him as a vengeful jihadist is completely at odds with how his own family members described him.

Hasan’s cousin laughed when an interviewer asked him if the shooter was “violent.”

“He was just normal, loved sports, never got into trouble.” He said his family was “shocked and baffled” by the incident.

“His parents didn’t want him to go into the military,” Mr. Hasan said. “He said, ‘No, I was born and raised here, I’m going to do my duty to the country.’”

The backdrop behind Hasan’s alleged motive for the rampage also represents an inch-perfect staging for subsequent characterization of those opposed to the war on terror as lunatics, crackpots and extremists.

In the hours after the event, we were told that Hasan was upset about being deployed to Iraq at the end of the month. This then mutated into the notion that Hasan was “anti-war” and later we were informed that he was “facing an FBI investigation for expressing sympathy with suicide bombers.” The fact that this was known by authorities six months ago and still Hasan was not only allowed to remain at the Army base, but also invited to participate in Homeland Security exercises only raises more red flags.

Then the lurid details really began to pour in to reinforce the Islamic terrorist stereotype – Hasan screamed “Allah Akbar!” before opening fire, he made “outlandish comments concerning U.S. foreign policy.”

As Michael Yaki highlights, the media characterization of Hasan as a Muslim terrorist was assumed by default, and almost from the first moment it seemed as though news anchors were reading from a script prepared well in advance.

“Once the name of the protagonist was established, the blogs lit up and the talking heads immediately turned to the “terrorist” word. Anderson Cooper repeatedly referred to Hasan as an “American Muslim.” I somehow don’t see Cooper referring to the Columbine killers, Dylan Klebold and Eric Harris as “American Protestants.” Yet, front and center, the media began their speculation on whether Hasan was a “recent convert” to Islam, what websites he visited, and whether “outside influences” — code words for Imams and terrorist recruiters — had compelled him to walk onto the base and begin his shooting rampage. Indeed, the media was playing {and replaying} up the fact that he was shown wearing “traditional” Arab garb earlier in the day as he bought some coffee, although other footage from the day before showed him wearing hospital scrubs — which thus far has never made the endless loop on CNN.”

Pointing out the fact that every other killer in U.S. history was described as a “mass murderer” and not a terrorist, Yaki slams the media’s contrived and “implied presumption (that) Hasan appears to be terrorist unless proven otherwise.”

Why were initial reports of three shooters reversed? Why were two alleged shooters taken into custody but quickly released? Was Hasan framed?

When the dust settles on yesterday’s tragic events at Fort Hood it may indeed turn out to be the case that Nidal Malik Hasan was a lone nut seeking to exact revenge for what he saw as perpetual war crimes being carried out against the people of Iraq and Afghanistan. If that is the case, it doesn’t make such crimes acceptable nor does it mean all people who oppose the war on terror are likely to go on a shooting rampage.

However, from all the evidence that has emerged thus far, and in comparing it with other terror scams in the past where patsies have been deliberately groomed and set up to be the fall guys for false flag attacks, everything we know about yesterday’s events suggests that there is infinitely more to the story of Nidal Malik Hasan than meets the eye.

...and virtually every day since ft hood, there's been another violent event in the states as the mass murder contagion rages on...
police: gunman caught after killing 1 in orlando* 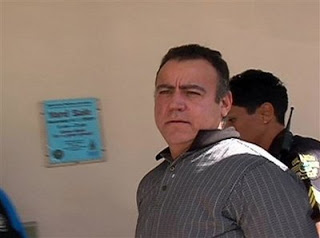