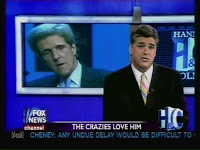 from newshounds: FOX News tried to paint Senator John Kerry as a 9/11 conspiracy theorist last night. Based on a brief statement Kerry made about the controlled demolition of a wall at one of the World Trade Center buildings, FOX tried to make the case that the 9/11 conspiracy theorists had bonded with him... At the beginning of the show, a chyron read, "The crazies love him" as Sean Hannity announced the upcoming Kerry segment.

During the actual discussion in the video below, the chyron read, "9/11 Conspiracy theorists jump on comments by Senator Kerry." Unfortunately, for the FOX News producers, neither host gave much credence to their premise.

I suspect Colmes was angry at the foundation for the discussion. How else to explain his unusually boorish and demeaning treatment of guest Webster Tarpley, author of a 9/11 conspiracy book? I’m no conspiracy theorist and I applaud Colmes’ effort to debunk the hyped-up connection between Kerry and Tarpley, but the one who came out looking irrational, in my view, was Colmes.

Colmes started off contemptuous toward Tarpley but within the first minute became downright hostile and insulting. "To claim that somehow John Kerry supports your cockamamie theories is absolutely insane," Colmes said in a raised voice.

Tarpley said he wanted nothing to do with John Kerry who, Tarpley claimed, is "a dilettante, an oligarch, he’s a rich elitist, his wife with her foundations..."

Frankly, I don’t think Colmes was in a position to be complaining about Tarpley taking cheap shots. Colmes borrowed a page out of Hannity’s playbook and accused Tarpley (without any evidence) of "further hurting the families who have suffered enough because of 9/11, to have to sit and listen to this garbage you’re putting out." Colmes went on to cite a Popular Mechanics article analyzing what caused the collapse. "That’s what caused it to come down, not some kind of crazy, government theory to hurt the American people."

By contrast, Hannity seemed polite and reasonable, despite the fact that Hannity told Tarpley he was living "in a paranoid, conspiratorial world."