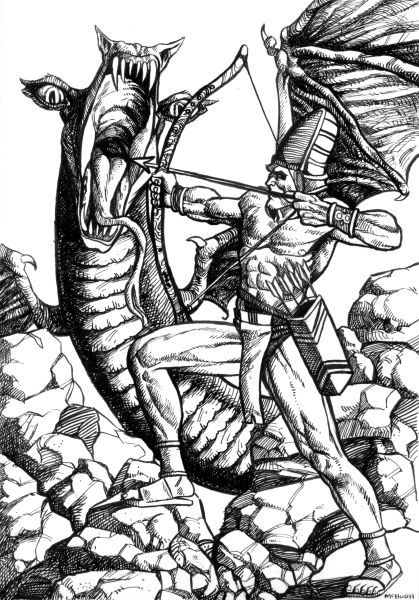 from carm.org: The Enuma Elish is a Babylonian creation myth that is named after its opening words, "When on high.” It was discovered in the ancient Royal Library of Ashurbanipal at Nineveh (current day Mosul, Iraq) in 1849.  George Smith translated the text and released his work in 1876 in the book, The Chaldean Account of Genesis.

In an article entitled “Why Does the Universe Look so Old?” Dr. Al Mohler, President of Southern Seminary in Louisville, Kentucky, counted the Enuma Elish among the “Four Great Challenges to the Traditional Reading of Genesis” (Acts and Facts, October 2010).  He writes, “As scholars began to study these documents, some began to see Genesis as just one more ancient Near Eastern creation story.”  Needless to say, the ancient myth has been the catalyst for much skepticism regarding the creation account in Genesis.

Professor Kirk Spencer from the Criswell College in Dallas, Texas gives this list of similarities between the Enuma Elish and Genesis creation account in his manuscript entitled, Ancient of Days: An Orientation in the Ancient World:

As stated earlier, many biblical scholars have concluded that the similarities between the Enuma Elish and Genesis creation account show that Moses must have borrowed his information from this ancient Babylonian myth.  It is important, however, to also mention the differences.  This list is also derived from Professor Kirk Spencer’s aforementioned manuscript:

After comparing the two accounts, it becomes clear that if one is to base a conclusion off of the similarities alone, then some important differences are being ignored.  In the Genesis account, Moses purposefully portrays a monotheistic God who operates within the parameters of organization and peace.  The Enuma Elish is polytheistic and the gods operate within the parameters of war and violence.  Furthermore, Moses seems to choose his words carefully in describing God’s creation.  For example he writes that God created, “the greater light to rule the day and the lesser light to rule the night,” as opposed to using “sun” (shemesh) and “moon” (sin), perhaps knowing that many may misinterpret the account as God creating lesser gods.

It is also important to note that the Enuma Elish is a Mesopotamian myth, influenced heavily by the surrounding region which consisted of two rivers feeding into a Gulf.  The land between (meso) the rivers (potamia) is where we get the word “Mesopotamia.”  Ancient Babylon was located here, near the Tigris and Euphrates, which are both fresh water rivers.  These two rivers feed into the Persian Gulf, which is a salty water mass.  The Euphrates and Tigris both carry sand and silt into the Persian Gulf which creates a Delta.  This is important because the Enuma Elish begins with Apsu (god of fresh water) and Tiamat (goddess of salt water) giving birth to the other gods and goddesses.  That is, the Enuma Elish seems to be a creation story influenced by its region.  Like the Delta being formed by the two rivers so are the Enuma Elish gods formed by the “mingling” of Apsu and Tiamat.

Genesis, on the other hand, depicts the single God doing the creating, not the other way around.
Another challenging issue for the Enuma Elish has been the question as to when it was recorded.  The story has been said to have been written anywhere from the 18th century to the 12th century BCE.  Many believe that Genesis was recorded in the 15th century during Israel’s wanderings in the wilderness.  Either way, it is highly unlikely that Moses, with all of the biblical history recorded about him, would have borrowed creation history from a polytheistic civilization existing to his respective east, while he lived and served a monotheistic God in the respective west.

Knowing the issues of the differences, the monotheistic and polytheistic natures, the obvious influence from the Mesopotamian region, and the unsettled dating of the recording, it is safe to conclude that it is highly unlikely that Moses borrowed or was influenced by the Enuma Elish.  Genesis is far different in nature than any of the ancient Near Eastern creation myths and therefore must not be considered among that fold.