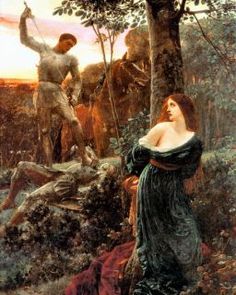 Gnosis, Love, and The Roots of Chivalry from peopleofshambhala.com: Denis de Rougemont’s Love in the Western World is in part a critique of fictional portrayals of romantic love, whether in film, TV, novels or plays. He argues that the conception of love perennially served up for our entertainment makes no real sense and in the worst case, make us dissatisfied with relationships based on genuine and lasting love.

De Rougemont argues that modern notions of romantic love have their roots in chivalry which in turn arises from Western Europeans’ contact with the Middle East during the crusades. The crusades, which began in 1096, opened a line of communication between the two areas. The crusaders were by definition people interested in religion. We may imagine them as being fanatical Christians, however de Rougemont suggests that some of them were in fact influenced by religious ideas they encountered on their way to Jerusalem. He notes the similarity between Iranian love poetry and chivalry. The love poems are in fact religious. The woman in the poem is a symbol of the divine. The ostensible love for the woman is really a love for God.


The argument is that the crusaders brought back this notion and gave it their own twist which turned into chivalry and a new conception of romantic love. This conception was a direct challenge to Catholic marriage, which at the time, consisted of arranged marriages. Love was something that might develop after marriage, but the marriage itself was not founded on the fragile basis of passion and feelings.

Chivalry was a heresy in direct conflict with Church teachings and orthodoxy. De Rougemont points to the strange story of Tristan and Isolde. Isolde is to marry King Mark. Tristan is supposed to transport Isolde safely to the king. Instead, Tristan and Isolde are given a love potion so that the two of them fall in love. Nonetheless, the marriage to King Mark takes place. But instead of that settling the matter, the ‘true love’ of Tristan and Isolde continues and they carry on a love affair.

The story explicitly sides with the lovers and condones adultery. Since monarchies are based on blood lines, it is particularly important who fathers the queen’s children. Hence, an adulterous queen threatens the legitimacy of the throne and may potentially destabilize the entire country. On top of this, King Mark is depicted as completely decent and blameless, except, such is the perversity of the story, that he takes on the aspect of the bad guy simply in being worried that his wife is having an adulterous affair. When one of the King’s advisors hatches a plan to determine whether the queen is cheating on her husband, the aristocrat is described as “a felon baron” as though what he is doing is immoral.

At one point the lovers run off together. King Mark finds them asleep in the forest. A sword lies between the two lovers symbolizing the chasteness of their love. King Mark is touched and leaves without waking them.

Chivalry, like Iranian love poetry, has a religious aim – to get closer to God and salvation. A knight declares his love for the lady but the lady is unavailable; often being his social better and also being married. The knight uses his love as an inspiration to become a better person; to be worthy of his beloved’s love in return. It’s important that the love is asexual. Chivalry has the same metaphysical commitments as Iranian Manicheanism which is a form of Gnosticism. Gnosticism sees physical reality and thus sex, and anything to do with bodies, as evil.

The Gnostics divided reality into four levels. They are The Physical, Demiurge, Sophia and The One. This corresponds to Plotinus’ levels of The Physical, Psyche/World Soul, Nous, and The One. In Plato this would be The Shadows, Physical Mind represented by the objects behind the wall creating the Shadows, The Forms and The Form of the Good. The Gnostics four levels can also be connected to the traditional levels of Body, Mind, Soul and Spirit.

What’s unique to Gnosticism is that while The One is good, Sophia resents The One’s creative powers and in imitation of The One, gives birth to the Demiurge, her evil son. The Demiurge then creates the Physical Universe which is thus evil. However, within human beings is a divine spark. With the help of secret knowledge (gnosis, hence Gnosticism), once one dies one may ascend the levels of heaven and rejoin The One. When one’s divine spark remerges with The One, one is obliterated. Hence, the greatest reward is oblivion. The pessimism of this is apparent, as is the comprehensively darkly negative conception of physical reality.

In Christianity, God creates the world and declares it good. With the Gnostics, it’s evil and must be rejected and avoided as much as possible. Some forms of Buddhism seem to concur.

One can see Gnostic tendencies arising occasionally in Christianity itself and Gnosticism has represented a challenge to Christianity ever since Christianity has existed. It has been argued that the Gospel of John was written partly to put a stop to Gnosticism which wanted to depict Jesus as either wholly earthly, or wholly spiritual. The evangelist is careful to combine both and makes references to Jesus suffering from bodily needs like thirst.

The crucial concept in the heresy of chivalry is the concept of a metaphysical ladder. One ascends by cultivating passionate romantic love, but frustrating any physical expression of this love. Passion is a kind of misery and can be maintained only by this frustration. The surest way to diminish passion is to act on it. So chivalry and romantic love have an explicit religious aim – salvation. They also depend on adhering to a Gnostic worldview which is pessimistic and, regarding the natural universe, nihilistic in the extreme.

So, chivalry, though a bad idea, has some kind of rationale. A man loves a woman. An obstacle must be found preventing sexual union. Sexual intercourse will bring the man crashing back down the metaphysical ladder. The physical world and the human body with it are evil and are to be avoided and rejected. Spiritual salvation is attained by maximizing passion by frustrating its natural expression. Similarities can be found with Tantrism.

De Rougemont’s complaint is that we have abandoned the metaphysics that once gave some kind of meaning to what has become the Western conception of romantic love and yet, every novel, movie, TV show and play dealing with romantic love adheres to this schema. A man and a woman love each other but some obstacle prevents them from getting together. With no opportunity for expressing itself, passion is heightened to bloodcurdling levels and the lovers can think of nothing else.

Once aware of the formula, the only variation is to be found in the source of the obstacle. Will it be that one’s families hate each other, as in Romeo and Juliet? Will the obstacle be racial? Does the man have to go off to war? Cue the woman running along the platform to catch a last glimpse of the man as the train departs. Will death, the ultimate obstacle, stop the promised bliss, as in the pinnacle of weepy movies, Love Story? Perhaps the man works for a giant megastore threatening to take over a privately operated bookstore owned by the woman but neither of them knows it. Or perhaps there will be a sci-fi device – time-travel, inter-dimensional misalignments, abduction by aliens – you name it.

The whole movie is about the inability of the man and woman to get together. Inevitably, they do, but only at the end. The lovers unite, kiss – fade to black. Thus passion is exulted. Infatuation is held up as the ideal of true love. In real life, passion cools, although hopefully not to disappear altogether. Ideally, arguably, if the relationship continues, infatuated love which is temporary, is replaced by lasting, mature love. This is a love of firm affection, respect and admiration, with kindness and understanding. In real life getting together is not normally the hard part, it’s staying together.

My concern is that the fictional portrayal of love may encourage people to look down on loving relationships that have nothing wrong with them. If passion is supposed to be the be all and end all of love, then inevitably long term relationships will look deficient. It would be difficult not to feel that one was ‘settling;’ one is ‘making do.’

Happy and good people are not great fodder for drama, as has often been noted. Actors are constantly expressing their interest in playing the bad guy because it’s more interesting. Where would drama be without adultery and ‘the breakdown of marriage,’ as de Rougemont notes?

Just as the advertising industry is the misery industry, aimed at getting us to feel dissatisfied with what we have, so too are film, TV, plays and novels. No sane person should want the misery of unrequited or impossible love – the only kind guaranteed to generate a forever ‘passion.’ And yet, thanks to this model, it can be hard to not glance with jaundiced eye at what is in fact a deep and abiding love.