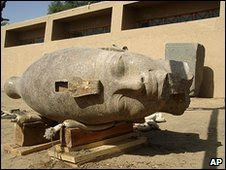 from ap: Egypt's Culture Ministry says a team of Egyptian and European archaeologists has unearthed a large head made of red granite of an ancient pharaoh who ruled Egypt some 3,400 years ago.

A ministry statement Sunday said the team discovered the head of Amenhotep III wearing the traditional white crown of the southern kingdom buried in the pharaoh's mortuary temple on the west bank of the Nile in the southern city of Luxor.

Head of the team, German-Armenian Egyptologist Hourig Sourouzian, said the head is part of a huge statue of Amenhotep discovered last year. The head is still missing part of the ceremonial beard which she thinks is still under the sand.

Two statues of Amenhotep made of black granite were found in March in the same temple.