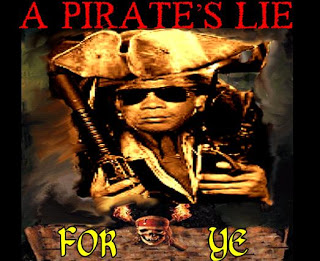 from clyde lewis: In this Ground Zero Lounge, Clyde Lewis asks his audience to think about the similarities between Pirates and a government that uses disproportionate force to destabilize a country. The recent “we’ll see” attitude towards prosecuting agents of torture from the Obama administration and the policies of “extreme force” towards poor an desperate Somalian pirates is disproportionate. This sets a precedent for the highest hypocrisy.

Almost from out of nowhere this spate of Pirate attacks are gaining the attention of the American media. The Obama administration is grandstanding on its intervention in Somalian waters, However the administration is lacking vision into the bigger picture. The people that get the mainstream narrative in the United States are not getting the whole story either. The reality is that this adulation of the violent policing of “piracy” is an embarrassment for us as a country and a complete exercise in hypocrisy on the part of the Obama administration. This Piracy incident underscores how haphazardly the foreign policy of the United States has not changed and unfortunately we see that policies of “shoot first ask questions later” are put into practice.

Somalia’s strategic position in the Horn of Africa means that any nation that dominates this area will have tremendous control over world trade. The even darker story behind the piracy takes into account CIA transitional puppet governments, illegal dumping in coastal waters and the Toxic aftermath. While piracy is an abhorrent practice, the half truth of Somalian “piracy” is equally despicable. This Ground Zero Lounge will lead you to a remarkable conclusion that twists its direction into the tragedy of ecological disaster on planet earth far more destructive than Global Warming.

Recorded every Monday evening in front of a live audience at Dante’s Inferno in Portland Oregon, the Ground Zero Lounge features Clyde Lewis in this audience participation discussion of current events as they relate to the paranormal.

2 responses to “ground zero lounge: a pirate’s lie for ye”