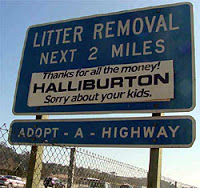 from abc news: Halliburton Co., currently the largest military contractor in Iraq with billions of dollars in Pentagon contracts, announced Sunday that it was planning to move its CEO and corporate headquarters from Houston to Dubai, the United Arab Emirates.

The move could eventually save the firm a fortune in U.S. taxes, but it is raising serious questions about its priorities and prompting at least one possible congressional hearing.

Dave Lesar, Halliburton's chairman, president and chief executive officer, made the announcement at an energy conference in the Kingdom of Bahrain.

Lesar said the goal of the move was to focus on Eastern Hemisphere "oil exploration and production opportunities, and growing our business here will bring more balance to Halliburton's overall portfolio."

Energy analyst Roger Read says if the company formally incorporates itself in the U.A.E., the banking mecca of the Middle East, company profits will soar.

"You'd probably be looking at a tax savings of several hundred million [dollars]. It's a win for the shareholders," Read said.

Move Makes Democrats Suspicious
Outrage over that possibility had Halliburton scrambling Sunday to explain it had no plans to incorporate abroad. Still, Democrats are suspicious.

The move may raise serious national security questions too, as happened last year with the canceled port security contract with another U.A.E.-based company, Dubai Ports World. Congressional outrage scuttled that deal; Halliburton will now have some explaining to do to avoid similar scrutiny.

"Obviously a company that has its headquarters overseas should be given a little more scrutiny than an American company," Schumer said. "No question about it."

Halliburton is already being investigated by different government agencies for various allegations of improper business dealings, and it is in the cross hairs of Democrats in Congress for alleged overbilling.

At a House Oversight and Government Reform Committee hearing last month, chairman Henry Waxman, D-Calif., noted that a government audit had indicated that Halliburton was responsible for "$2.7 billion in suspect billings."