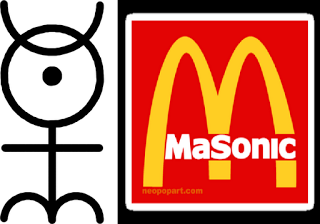 Is It All About The Monas?

Bob Schlenker examines monas hieroglyphica, alchemical glyph of John Dee, Elizabethan Magus and Court Astrologer to Queen Elisabeth I, in recent entry, "Monas - Hidden Meaning of McDonald's Golden Arches, and the Great Seal of the United States."  Schlenker inquires whether "...American institutions of McDonalds and the Federal Reserve all about the monas?" Monas Hieroglyphica refers to occult symbol created in 1564, and also, name of a book by Dee that explains symbol's meaning.  "The symbol [picture, left]  is constructed from four distinct symbols: the astrological signs for the moon and the sun, the cross, and the zodiacal sign of Aries the ram, represented by the two semi-circles at the bottom of the glyph..The symbol is intended to represent the reality of the monad, a singular
entity from which all material things are said to derive.," according to about.com.

Schlenker sees not only mason but monas as an anagram in both McDonald's name and the Great Seal:

"The monas-mason connection prompted me to give some more consideration to the great seal on the back of the dollar bill, which has been decoded in a couple ways to derive the word “Mason.” I haven't found the versions entirely satisfying...I believe the more deeply hidden esoteric embedding is that of monas, which is more directly derived by the tracing of the implied hexagonal star [picture, below],"  says Schlenker. 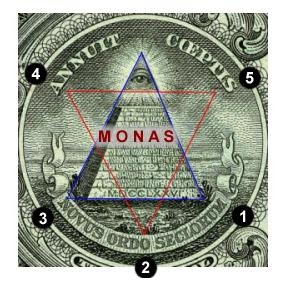 McDonald's golden arches are interpreted  by Schlenker as the Aires symbol or fourth element "at the bottom" of  the monas:

"I understand the golden arches as a symbol of the sodomite gateway. The letter "m" is the simple graphic form of a male backside, another in the collection I've presented recently. As arches, the basic elements compare to the royal arch of Freemasonry, a squared (sides and bottom) circle (arched top) sodomite gateway symbol, and the joining of heaven (arched top) and earth (the bottom on the earth). You could say the letter M is for Mason, (Masonic McDonald's Golden Arches Logo) [top picture, right] and Monas." 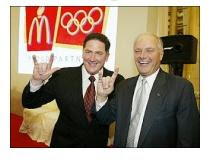 Schlenker summarizes what once appeared dubious upon closer examination seems obvious? The present writer leans in direction of highly original view by Schlenker, especially, when you throw in the baphomet signing (above picture) by corporate heads for McDonald's Europe and United States divisions.