house affirms ‘in god we trust’ 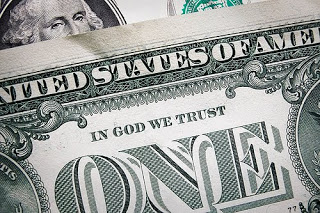 from politico.com: The House on Tuesday easily passed a resolution that reaffirms “In God We Trust” as the national motto. The measure, which passed 396-9, encourage public buildings, schools and government facilities to display the phrase. Its sponsor, Rep. Randy Forbes (R-Va.), said the bill was needed because of a “growing, disturbing pattern of inaccuracy and omissions” surrounding the phrase. Passing the resolution “provided clarity amidst a cloud of confusion about our nation’s spiritual heritage and offered inspiration to an American people that face challenges of historic proportion,” said Forbes in a statement released after the vote. Its opponents insisted that the measure was a waste of time.