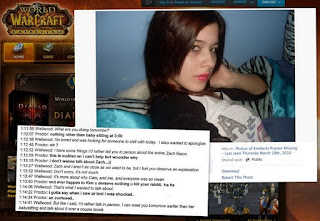 from threat level: When Kruse Wellwood, a 16-year-old in British Columbia, raped and murdered a classmate who jilted him, he attempted to set up a digital alibi by sending an instant message to the missing girl asking why she never showed up to meet him. But the disturbed teen, ironically the son of a convicted murderer who’s serving a life sentence for murdering a different 16-year-old girl, left loads of other digital evidence pointing to his crime – including a text message he sent from the site where he and a teen accomplice dumped the body of their victim, Kim Proctor... He later confessed to murdering Proctor in a World of Warcraft chat session.